A Paradigm Shift of Faith

Have you ever experienced a paradigm shift?

One example is the development of digital watches. The innovators of this technology offered to work with the Swiss watchmakers who, so convinced their way was the only way, refused the offer. The technology went to Texas Instruments and a Japanese company and the Swiss watchmakers lost 70% of their business almost overnight, because of their inability to make this paradigm shift. 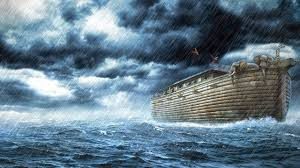 The story of the flood in the first reading from Genesis is all about the old paradigm of seeing God as angry, wrathful, stern, punishing, and acting out of that anger. The flood does work justice by destroying all the evil people (“I will blot out from the earth the human beings I have created”) and saving the righteous family of Noah, but it is a harsh justice. The peace it brings after the flood is an empty peace – there is nothing left. It is a hollow victory, like that of Assad in Syria after the battle of Aleppo – he won, but all that was left was a ruined city.

Moreover, history teaches us this harsh justice did not work – people continued to be evil, sin and do wrong through the centuries and millennia, breaking covenant after covenant, to the present day. Think of mindless wars, economic greed and corruption, cultural and religious oppression, murder, injustice, abortion, terrorism, euthanasia, political massacres, broken and divided families, etc., that plague us every day.

The Gospel, on the other hand, is all about the new paradigm God is bringing about in Jesus. An interesting conversation takes place in the boat with his disciples after the feeding of the multitude. First Jesus warns them to beware of the yeast of the Pharisees and Herod and they don’t understand – thinking Jesus was referring to a shortage of bread for their lunch. Jesus then chastises them for not understanding what the multiplication of the loaves was all about. What is really going on here? What is he getting at?

The yeast of the Pharisees could be their unbelief, stubborn pride, and jealousy, but more likely, it was their collusion in a corrupt, legalistic, exclusive and hard-hearted religious system they had constructed to benefit themselves, based only on law, rules and duty – which never changes peoples’ hearts.

The yeast of Herod is probably his lust for power, control and domination, as well as his abuse of the poor to achieve his ambition for fame and wealth – a yeast that Jesus could see affecting the reign of God he was establishing, a danger he wanted his disciples to avoid.

Basically, when the disciples protested that they did not have enough fish and bread to feed the crowd and that Jesus should send the people away to fend for themselves, what they didn’t get was they were in the presence of the Bread of Life, so why send the people away? It is he and he alone who could truly satisfy the deepest hunger of their hearts.

And when he asked them about the number of baskets of crumbs left over, 7 and 12, he was subtlety implying that he was the Messiah, the Lord and Savior of all humanity, both Jews (the symbolic 12) and Gentiles (the symbolic 7). That is what he so desperately wanted them to understand.

As the Messiah, Jesus had four roles: to restore the Temple, to gather all nations to himself, to overcome the enemies of Israel, and to reign over all creation. By feeding the multitude, and by his life, passion, death and Resurrection, he was fulfilling all those roles. He cleansed the Temple, people came to him from all directions, he overcame the real enemy of Israel, sin and death, through his resurrection and he is reigning over all creation as Lord.

In the context of the first reading, Jesus was implying he was the new Law, the new justice of God that would work, the new yeast and the new flood that would truly cleanse and recreate the world, not by destruction, but by transformation of human hearts.

It is this unconditional love and forgiveness – this compassion – that alone will change the course of history for those who believe in him. And that is the key – to make that paradigm shift, we must truly believe in Jesus as Lord, Savior and Messiah who alone can forgive our sins, heal our defects of character, and satisfy the deepest yearnings of the human heart. All we need do is to believe in him and invite him into our hearts and lives.

The Eucharist is an experience of the flood of Jesus’ unconditional love and compassion that forgives, heals and transforms us. So, let us place our faith in Jesus as Lord, Messiah and Savior, let his love flood our hearts with forgiveness and healing, and transform us into new creations, helping to build up the Reign of God on earth, here and now.