Mastering Sin and Fostering an Attitude of Gratitude

“Sin is lurking at the door; its desire is for you, but you must master it.” (Genesis 4:7)

The readings today invite us to turn to God for the spiritual help and healing we need to overcome temptation and let go of sin in our lives.

This familiar story of Can and Abel starts off with great promise. Both brothers have prepared offerings to God in response to God’s goodness to them. But there is a difference not only in their sacrifice, but also in their attitude towards their sacrifice and their perception of God.

Cain was a tiller of the ground, a farmer, while Abel was a keeper of sheep, a shepherd. A shepherd basically watches over the sheep God has provided for him, while a farmer must till the soil, plant the seeds, weed the fields and harvest the grain – all involving much more effort. That runs the danger of what we could call a “spiritual occupational hazard” – to rely on one’s own efforts and expect some reward for the effort. Having grown up within a workaholic farming environment, I can attest to the subtle power of that temptation to “earn a father’s love by one’s efforts” and indirectly, even unconsciously, be trying to earn God’s love at the same time. 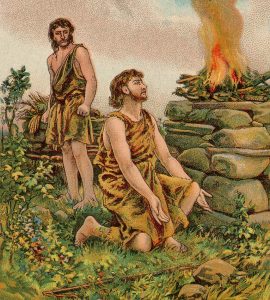 I suspect there was some of that happening in Cain’s offering to God, which might explain why God was less pleased with his offering than with the purer, less self-centred offering of his brother Abel. Unfortunately, Cain was unable to see his own dark, painful inner reality even when God pointed it out to him, and more importantly, offered him divine assistance to overcome that temptation to jealousy and prevent that jealously from leading him into something much more serious – murder, or in this case, fratricide.

God is offering that same divine strength to us as well. God knows our hearts, our struggle to love, the anger we may harbour and the difficulty we have to accept and to forgive. Yet God is speaking to us, just as God spoke to Cain. God is inviting us to confront our temptations so that God can change our hearts and transform out behaviours. God is asking us to listen so that God can help us find the way to love.

I think the reason Jesus reacted as he did in today’s gospel, with a sigh and a gentle admonishment to the Pharisee’s demand for a sign from heaven, is because after all those centuries of religious practice, they were about to re-enact the very same failings and sins of Cain – jealousy and murder (in this case, crucifixion). These righteous leaders of the Jewish religious establishment, who ironically were most intent on keeping the law scrupulously, ended up breaking it most grievously.

The reasons for that are really the same as those of Cain – false pride and reliance on their own efforts to make themselves holy, instead of a humble acceptance that all good things ultimately come from God, and the offerings made to God of a contrite, humble heart rather than the offerings of the work of one’s own hands for which one could take credit. I believe these Pharisee’s fell for the temptation to find worth and meaning through possessions, prestige and power, the false gods to which their ancestors also succumbed throughout salvation history.

These are the false gods Jesus, so secure in the Father’s love for him, was able to reject during his temptations in the desert (to turn rocks into bread, jump off the temple, and have all the kingdoms in the world if he would bow down and worship Satan). When throughout his life and ministry Jesus showed no interest in accumulating wealth, being famous (the messianic secret) or having power and control, the Pharisees who were addicted to precisely these three things, realizing they could not control Jesus and that he would not compromise as they had to align himself with them, could only react with jealousy and in the end, become like Cain and murder him.

It is noteworthy that the program of Alcoholics Anonymous leads those who practice it into a right attitude towards God, that of Abel – humble awareness of one’s own inability to make one’s self worthy, and reliance on God expressed through slogans such as “Let Go and Let God,”, “One Day at a Time” and “An Attitude of Gratitude” and especially Step One, “Admitted I was powerless and that my life had become unmanageable.”

The Eucharist is our greatest prayer combining beautiful attitudes of thanksgiving, community, sacrifice and grateful remembrance of God’s goodness to us.

May our celebration empower us to let go of the attitude of Cain and the Pharisees, and turn to God for the spiritual help and healing we need to overcome temptation and let go of sin in our lives.