During this last week of the liturgical year, the readings continue an apocalyptic theme, and present us with two scenes – a heavenly one and an earthly one and the connection between the two.

These two scenes invite us to both worship God with joy, and witness to Jesus with our lives and perseverance.

In the first reading, the heavenly scene, we are invited to worship God with all our being, in gratitude for who God is and what God has done through the ministry of the Lamb. Whereas victory usually is associated with force, violence and death, this “lion of Judah” is a lamb who was slain, who triumphed over evil and death by dying, and transformed death into resurrection and new life for us.

In the gospel, we return to earth and are called to witness to our faith in God’s love, in Jesus the Lamb, even to the point of suffering and persecution for the sake of the gospel. We are to persevere and show endurance to the end, to live Calvary in slow motion.

The Responsorial Psalm returns us to the call to worship, and to do so with joy, awe and gratitude for what God has done among us, faithful to God’s promise. We are to sing a new song to the Lord.

So, there we have it – in response to God’s unconditional love for all of humanity, revealed to us by Jesus Christ, the Lamb of God, we are to join with the heavenly choirs in singing God’s praise, and find the strength to witness to that love, even if it means suffering and persecution. 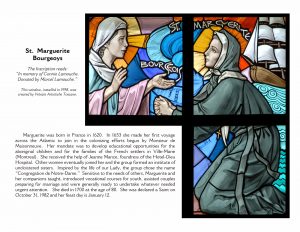 Someone who did this exceptionally well is St. Marguerite d’Youville, foundress of the Grey Nuns in Quebec. Since 1846, the Oblates and the Grey Nuns were the ones who evangelized most of western and northern Canada. Having ministered with many Grey Nuns, I feel a deep connection to St. Marguerite. After her alcoholic and abusive husband died, and the death of two of her children, out of her deep faith and love for God, Marguerite gave herself to works of charity, witnessing to God’s love by starting hospitals and caring for the poor. As the sisters wore grey habits and worked often with drunks, they were slandered at times by the populace and called “Les Soeurs Grise” which in French means the “tipsy sisters.” Undaunted by persecution and misfortune, such as a fire which destroyed one hospital, Marguerite showed endurance and perseverance against all odds, attracted other women to join her, and founded the Grey Nuns. In 1991, she was declared a saint of the universal church. She was one who worshipped God with her whole being, and witnessed to Jesus through suffering and persecution. 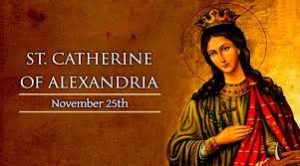 Today, we are invited to honour another saint, Catherine of Alexandria. According to legend, Catherine was a woman of learning in 4th century Alexandria, Egypt, who at the age of 18 converted to Christianity. She was imprisoned for speaking publicly against the Emperor Maximinus’ persecution of Christians. While in prison, she was visited by the empress and the leader of the armed forces, both of whom converted. For this she and they were martyred. Tortured by being strapped to a spiked wheel, Catherine was eventually beheaded about 130 A.D. She is a patron of librarians, teachers, students, jurists, nurses, unmarried girls, philosophers, those who work with wheels (potters, spinners, mechanics, etc.) the dying and several other groups.

I also feel a certain connection to St. Catherine, as our pilgrimage group, in 2003, visited a monastery named after her. Officially called the “Sacred Monastery of the God-Trodden Mount Sinai”, it is an Eastern Orthodox monastery located on the Sinai Peninsula, at the mouth of a gorge at the foot of Mount Sinai, near the town of Saint Catherine, Egypt. We were awakened at 2 am to climb the mountain, arriving just in time to view the sunrise which Moses might have seen – an unforgettable experience.

The Eucharist is our greatest prayer and way to worship God. May our celebration empower us to witness to Jesus even to the point of suffering and persecution, as did Saints Catherine and Marguerite d’Youville.