Faith like a Mustard Seed and Memorial of St Dominic

The disciples, called to heal a man’s disturbed son, were just as incredulous. But Jesus told them the smallest amount of faith – faith the size of a mustard seed -could move mountains. I once obtained a bag of mustard seed from a seed plant in my hometown of North Battleford, Sask. and they are truly tiny – about the size of a carrot seed. It is amazing how that small seed can be transformed into a large mustard tree, and how a tiny oak seed can grow into a huge oak tree. But that is the kind of faith Jesus is asking us to have in him.

Surely the disciples wondered how they could ever develop that kind of faith. For that matter, how can we?

The beginning of the answer, according to The Word Among Us, lies in today’s first reading: “I will stand at my guard post, and station myself upon the rampart and keep watch to see what he will say to me” (Habakkuk 2:1). The prophet choses a particular place and posture, pays attention to the signs of the time, and becomes very attentive to the promptings of the Holy Spirit. It seems that Habakkuk even journaled, as the Lord asked him to write the vision down and make it plain on tablets!

So must we if our faith is to grow and become like a mustard tree. This is all about contemplative prayer, involving a conducive place, posture, time and above all, pondering the Word of God, seeking only the knowledge of God’s will for us and the power to carry it out (Step 11 of the AA program). I would highly recommend practicing Lectio Divina (reading a passage, meditating on that passage, praying with it and then just being in God’s presence soaking up God’s love). The last stage of this process is Operatio – some way of responding to the Word with which we have prayed. That can be writing in a journal, or for me, writing a love letter to Jesus sharing my feelings about his Word that I have prayed over, as well as working on a homily based on that Word.

All of this is conducive to growing in faith and will help deepen our relationship with God. We will learn what God’s voice sounds like. We will become more familiar with God’s mind and learn more about God’s unfailing love.

Does this sound incredible? No more than floating on water or flying supported only by air, really. Trust the one who made us, to teach us and grow our faith. Let God show us we are made to move mountains. 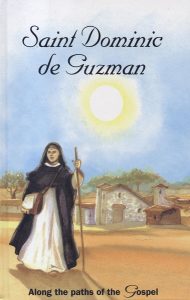 Today the church invites us to honor someone with that kind of faith, St. Dominic de Guzman. Born in Caleruega, Spain, around 1172, he began his priestly life in Osma as a cathedral canon. In 1205, he and bishop Diego of Osman were sent to France to combat the Albigensian heresy. The Albigensians believed that all matter was evil and all good resided solely in the spiritual realm. Dominic worked tirelessly to defend the truth of the Incarnation. By 1216, Dominic had founded the Order of Preachers (Dominicans) and soon had houses in all the university cities in Europe. The priests were highly educated and could be sent where the need was greatest, fighting heresy and preaching the importance of the sacraments.

Dominic himself walked from city to city, preaching and inviting vocations. He stressed education, poverty and community life while being involved in the world, contrary to the rich Benedictine monasteries of the time. The Friars had a lasting impact on mediaeval Europe fighting heresy and altered the course of Church life with a well thought out and rational response to the new learning that was appearing as Aristotle was becoming known again in the Christian West. Two or three times he was chosen bishop, but he always refused, preferring to live with his brothers in poverty. Throughout his life, he preserved the honor of his virginity. He desired to be scourged and cut to pieces, and so die for the faith of Christ. Of him Pope Gregory IX declared: “I knew him as a steadfast follower of the apostolic way of life. There is no doubt that he is in heaven, sharing in the glory of the apostles themselves.” When he died at Bolognas in 1221, the order had already begun to flourish. He was canonized in 1234 and is a patron saint of the Dominican Republic, astronomers, scientists and the falsely accused.

May our celebration help make our faith into mustard seeds that will transform us into movers of mountains, like that of St. Dominic.