Optional Memorial of St. Sixtus II and his Companions

When asked to address a Christian Business Men’s Association breakfast just before Holy Week one year, I decided to speak about Radical Discipleship and Redemptive Suffering. While the talk was well received what struck me most was the response of a few individuals after who came up to me with comments like, “That was very unusual.” “Where did you get that information?” I’ve never heard this before.”

I was a little bit shocked, certainly surprised, to hear those comments from this group. I can only assume they are more used to hearing about a gospel of prosperity from their pastors. That leaves me wondering what these pastors would say about today’s gospel passage, in which Jesus invites us to take up our cross and follow him if we would be his disciples?

The message to me is clear – if we are to be genuine disciples, we must take up our crosses and follow Jesus through his paschal mystery of passion, death and resurrection. Another way of putting this is that we are called to be radical disciples accepting some redemptive suffering in our lives.

In the Gospel, presents his disciples with the paradox of the Cross. They are to accept suffering as the way to follow him. If they gain their lives and refuse the cross, they will lose their lives. On the other hand, if they accept the cross and lose their lives, they will find life. This alludes to the mystery of redemptive suffering that is also the key to the kingdom – and an invitation to examine more closely this important teaching.

First of all, Jesus wants disciples, or followers. The Greek word for disciple is mathētḗs which means a life-long learner, one who makes it his or her task to try to learn as much as they can about the master, to emulate that master, to try to become a carbon-copy of the master – to think, feel and act like the master.

According to Ron Rolheiser, basing himself on St. John of the Cross, there are three stages of discipleship. Essential discipleship is for the young who are asking themselves what they will do with their lives. Generative discipleship is for those who have careers, families, homes, etc., and are now making the world a better place by using their time, talent and treasure.

The third stage, radical discipleship, happens to us when we get older or become ill and can no longer do anything – everything starts to be done to us, and a variety of crosses or forms of suffering begin to enter our lives, leaving us no choice in the matter. This is where our faith, and the call of Jesus comes in. We have a critical choice – we can resist and become bitter about this suffering, or we can allow that suffering to take on deep meaning and purpose, and become redemptive, linking us with the suffering of Jesus during his life and especially his passion and death on the cross.

The cross Jesus speaks about can be a challenge, some inconvenience, some form of unwanted suffering, an unpleasant burden, and unwanted intrusion into our lives. How we deal with this cross or suffering is critical.

Suffering can make us bitter, or better. The key to allowing our suffering to make us better, is to accept it without bitterness or resentment, like Jesus on the cross. On the cross, as evidenced by the Shroud of Turin, Jesus was totally at peace, because of his loving union with the Father, and his trust in the Father’s love for him that would lead to new life. His profound faith in that love allowed him to experience even the apparent absence of God in his life – “My God, my God, why have you abandoned me?” – without losing hope or serenity, as evidenced by his prayer, “Father, forgive them, they know not what they do.”

This is actually the secret to the mystery of the kingdom of God. Those who have this faith, this kind of trust in God’s love to accept suffering without bitterness or resentment, are actually already in the kingdom of God. Those who lack this faith are destined to try to avoid suffering in even desperate ways, such as is happening in our society today, which doesn’t understand suffering. So, what we see happening is physician-assisted suicide for the elderly, and a pandemic of opioid addiction as people try to medicate their suffering and pain, instead of allowing it to mature their character. As one psychologist from Ottawa wrote in Maclean’s Magazine some years back, “We used to think the enemy was death – now we know it is suffering.”

What Jesus is asking us to do is to follow him through his Pascal Mystery experience of passion, death and resurrection. The cross that comes our way becomes our passion, our suffering. When we accept it and deal with it, it becomes our death as we let go of bitterness or resentment. That in turn becomes our resurrection as we rise to a new depth of maturity, a deeper relationship with the suffering Jesus and greater peace and serenity in our lives.

These crosses and suffering can take many forms and can occur on a daily basis. As an example, I like to pull away for a day each month for a 24-hour Poustinia or retreat of undisturbed fasting, resting, prayer and writing. During one such retreat, someone asked if they could come over for the Eucharist, after which he really wanted to take me out for lunch to help him debrief some personal issues. Realizing that interruptions to our prayer are not really interruptions but can be part of prayer itself, I accepted. Then I was called to loan my car to that person, which meant I had to borrow a truck, transfer a load of materials and switch vehicles. My openness to doing all of that including some loss of “poustinia time” meant I was able to accept this interruption, this cross, with serenity and even joy. I was living this teaching of Jesus that gave me a little taste of the kingdom by being a radical disciple accepting some redemptive suffering. And as one person put it, when we act like God, we get to feel like God. 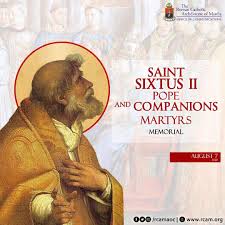 Today, the church invites us to honor St. Sixtus II and his companions who certainly followed Jesus as radical disciples. Pontius, a biographer, writes that St. Sixtus was a “good and peaceable priest” who became pope in the year 257, succeeding Stephen I. That same year, persecution of Christians began under Emperor Valerian. The next year, Sixtus and several of his deacons were put to death in a catacomb where they were celebrating Mass. Sixtus offered himself to prevent the arrest of others and was beheaded while speaking to the assembly. Four deacons were then martyred, followed by two others later that day. Sixtus was buried in the papal tomb where he met his death but his relics were moved centuries later to the church of St. Sixtus, where they remain and are venerated still.

We can even see the Eucharist, this sacrifice of a few hours of our day, as an opportunity to be a radical disciple accepting some little bit of suffering for the sake of the kingdom, that also places us more deeply within that kingdom. May our celebration today deepen our faith in and experience of God’s love for us, and empower us to follow Jesus into radical discipleship by accepting some crosses, some redemptive suffering in our lives with peace and joy.