God’s Ways Are Not Our Ways:

A young lad, allowed by a storeowner to lick the molasses from an empty jar, decided he should pray first, “Lord, make my tongue adequate to this occasion!”

The first reading from Hosea exudes with the language of love: God loved Israel from his youth, called him out of Egypt as a son, lavished tender love on Israel, taught him how to walk, embraced him, healed him, led him with kindness and bands of love, lifted him up to God’s cheek, and bent down to feed him.

Suddenly, the reading bluntly states Israel rejected God’s love and refused to return to God. In the time of Hosea, the people prospered and became either more secular or involved with pagan religions of their trading nations. They forgot the Lord who was their God, had rescued their ancestors from Egypt and had established them as a nation set apart to serve God and be an image of God on earth.

We could say the same thing has happened in our society today: wealth, technology and secularism has made possible abortion, doctor-assisted suicide, same-sex marriage, transgender self-identification, Sundays dominated by sports or recreation and not religion, a new atheism, divorce and family break-ups more than ever. Perhaps in some ways our present situation is worse than that of Hosea’s time.

God had every reason to abandon and punish Israel, but God’s ways are not ours – God offers relationship and redemption, not revenge and recrimination; salvation, not condemnation. God reacts in disappointment and anger (his heart recoiled), but does not act out of that anger. Instead, God’s compassion grows even stronger, warmer and more tender! God’s response to infidelity and idolatry is to love even more and be even more compassionate; to pour on more love and forgiveness. Pope Francis echoes this reality when he reminds us God never tires of forgiving, of showing mercy. Julian of Norwich also sees only mercy and not anger in God.

Think of the worst thing you have ever done, and picture Jesus face to face with you, forgiveness, understanding and compassion pouring out of his face, eyes and posture.

Our challenge is to let God, in Jesus, disarm us with tender love and cleanse us with his compassion. All we need do is repent as Israel does in the psalm, receive God’s tender compassionate love and forgiveness, and then go out as his disciples to do what they did then: proclaim the kingdom and love others as God has loved us – with a love that will heal them and make a difference in their lives.

Bishop Angaelos, leader of the Coptic Orthodox Church in the United Kingdom, says he is willing to forgive the Islamic State affiliates who boasted of brutally killing 21 of his fellow Egyptian Christians in Libya. He admits that offering forgiveness after such a horrific crime may sound “unbelievable” to some. Still, he says forgiveness is his responsibility as a Christian minister: “We don’t forgive the act because the act is heinous. But we do forgive the killers from the depths of our hearts. Otherwise, we would become consumed by anger and hatred. It becomes a spiral of violence that has no place in this world.” Further revealing his remarkable magnanimity, he asked that the world work to protect not just Christians, but all vulnerable people. 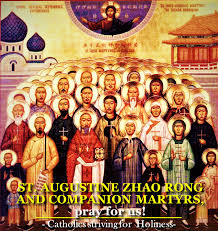 Today the Church invites us to honor St. Augustine Zhao Rang and his companions. The 19th century was a time of Christian persecution in China. Imperial edicts imposed the death penalty for evangelization as well as for the education and ordination of priests. Fr. Augustine Zhao Tong was a Chinese diocesan priest who had been a soldier. While escorting a missionary priest from France he converted and was baptized. He then studied at a seminary and was ordained. In 1815, he and 119 companions were tortured and martyred. They were canonized by Pope John Paul II in 2000.