Have you ever met a leper?

Faith in Jesus can heal our modern leprosy and lead us to experience eternal life here and now.

In the gospel, a man covered with leprosy appears before Jesus “in one of the cities,” bowed with his face to the ground, begging Jesus to heal him. Imagine the misery of this leper, considered unclean, excluded from normal discourse, full of shame, bent over, trying to hide some of his disfigurement.

This gospel reminds me of an incident our retreat master Fr. Gregory Hrynkiw shared with us during the Western bishops retreat in Mission, BC. He happened to strike up a conversation with a young lady in a certain city whose mouth and tongue had been pierced, and whose arms were covered with tattoos. He thinks she might have initiated the conversation because he looked kind of “gothic” in his black robes. In all innocence and concern, he asked if the piercing was painful. She replied only at first until she got used to it. His next question came spontaneously, “Why?” None of us will ever forget her reply: She realized she could never compete with and be as pretty as the models in the media, so feeling defeated, she went in the other direction, and deliberately made herself ugly in an attempt to get attention that way.

It struck me this young lady represents a huge segment of our modern society which suffers from the lack of an infinite horizon of faith, a bigger picture into which they can place their lives. They also lack a sense of self-worth and being loved by a loving Father-Mother God, and so are driven to survive any way they can. While tattoos can be an esthetic statement for those with lots of confidence, for more insecure, vulnerable persons like this young lady, they can be a desperate attempt to attract some attention, to gain some deeply craved love, to fill a hole in their soul. 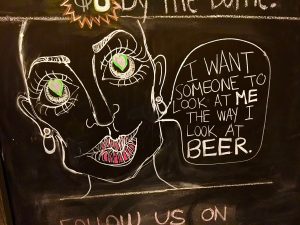 In an airport restaurant once, I noticed a sign that read, “I want someone to look at me like they look at beer.” That sign is not just a smart marketing gimmick – it is coming from somewhere and speaks to this rampant need for love and attention. These can be our modern lepers, and they are legion.

The leper in the gospel can be a model for them, and for us all who suffer in our own secret ways of this modern leprosy. When the leper saw Jesus, he believed in him and his power to heal, called him “Lord” and begged for a healing. The leper put his trust in Jesus to heal him. Jesus then showed him the compassion of God, reached out and touched him, breaking all the cultic rules of cleanliness, and healed him.

It is significant that Jesus uses the words “Be made clean” and told him to go show himself to the temple priests and make an offering for “his cleansing” as Moses commanded. There is much happening below the surface here. The temple religion was supposed to move out to the outer court of the gentiles, and bring God’s holiness to the whole world. Instead, it had become self-centered, selfish, judgmental, and exclusive (there was a sign on a wall of the temple barring gentiles from going any further “on pain of death”). The selling of “pure” sacrifices had also turned the court of the gentiles into a market place so that they could no longer pray there (the main reason Jesus cleansed the temple).

The temple is also where people were to go to be cleansed for worship (in the adjacent mitzvah or ritual bath). So, what was happening here is Jesus, the new and true temple where God dwelt, was bringing the wholeness (holiness) of God out to the world, to the poor especially. The cleansing was happening, not in the temple, but out in the cities and the countryside, wherever Jesus went and was. In so doing, Jesus was following the way prepared by John the Baptist, who as the son of a temple priest Zechariah, should have been in the temple, but instead was out in the wilderness, and cleansing people in the Jordan. That was a radical act – like a trumpet blaring something totally new was coming. John’s water baptism was only a preparation for Jesus, the Messiah, who would come with the Spirit, water (baptism) and blood (Eucharist). That is why Jesus told the leper to show himself to the priest as a priority – to show them Jesus was the Messiah, the true temple, finally fulfilling all the messianic prophecies, and doing what the temple cult had always failed to do.

The evangelist John, in the first reading, eloquently weaves encouragement and deeper meaning into that miracle. We are to believe in Jesus as the Son of God who overcomes the world. The “world” is everything in our universe that is not under the dominion of Jesus, not under the care of our loving Father. That includes the kingdoms and governments of our day who more and more are slipping away from “in God we trust” and trying to remove God from any significant role in public discourse and life.

What happens then is more and more control by governments pushing ideologically driven agendas disguised as progress yet bordering on the totalitarian. The moment they are resisted, the teeth of “political incorrectness” comes out, thus limiting free speech. That is why Satan could tempt Jesus with “all the kingdoms of the world” because in that sense, they are his. Jesus, so secure in the Father’s love for him, was able to say “no” to those temptations and choose to be simply fully human.

The last line of the gospel gives us the secret to why Jesus could resist such powerful temptation, and be so secure in his relationship with the Father – and that is contemplative prayer. Even when he was riding a wave of popularity and success in ministry, he would pull away and spend hours in prayer, communing with the Father, and soaking up the Father’s love as the Beloved Son of the Father. What more incentive do we need to do the same – to nurture our relationship with the Father, Son and Holy Spirit through centering prayer leading us into even deeper contemplative prayer?

Ron Rolheiser wrote an article entitled, May God’s Kingdom Come But Not Yet, in which he commented, “It’s here now, but not fully; a present reality, but in tension. And it’s still coming, in its fullness; still to arrive, in ecstasy. It’s already here and it’s still to be realized. For instance, when Jesus says he has come to bring us new life, he is not talking simply about our future our lives in heaven; he is also talking about our lives here, already now. The new life is already here, he assures us. Heaven has already begun.

Jesus preached this very clearly. The problem was not that his hearers didn’t understand him. They understood; but, almost universally, they resisted that message. Much as they yearned for God’s Kingdom to be already here, they preferred to push things into the future. Having God become concrete in their lives was far too threatening.

St. John is clear – God has given us eternal life through Jesus, who is eternal life – so those who believe in Jesus already have eternal life. We can choose to enter into experiencing eternal life here and now through the forgiveness of our sins and the healing of our defects of character (painful emotions, negative attitudes like low self-worth, and addictions), all of this a powerful dose of God’s unconditional love that can transform our lives.

The Eucharist is an opportunity to take all our struggles, successes and challenges to God and offer them to God to receive both God’s forgiveness and healing, and experience a foretaste of the heavenly banquet here and now.

May our celebration strengthen our faith Jesus, lead us to experience eternal life now, and empower us to take his love out to the world.