The liturgy today invites us to deepen our faith in Jesus as the Messiah, revealing a God who is love, and then express that faith by living his commandment to love.

In the first reading, John gives us a glimpse into the importance of faith in Jesus as the Messiah, with the words, “Everyone who believes that Jesus is the Christ has been born of God.” When we accept in our minds and hearts that Jesus is truly the Christ, which means the “anointed one,” which in turn means the long-awaited Messiah of Judaism, something shifts within us – we enter into a new relationship with the God, the Father of Jesus who is the Messiah. We are, in a real sense, born again – born of God. 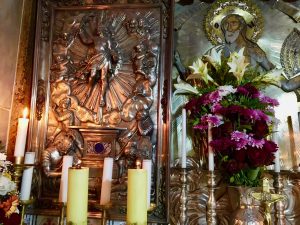 I recall finishing the Way of the Cross on the bus heading back to Tel Aviv on the final day of a pilgrimage to the Holy Land (We had managed to pray only the first ten stations on the way to the Church of the Holy Sepulcher the day before to visit the tomb of Christ). When I asked our group on the microphone if they had seen the 15th station of the Cross in the tomb (it is etched on the wall above the slab covering the tomb), I heard our guide, a Reformed Jew sitting near where I was standing, mutter (with disbelief) “He is probably going to mention the Resurrection.” He was excellent throughout our pilgrimage with the historical facts about Jesus – but here he faltered. Jesus for him was not the Messiah, and was not risen from the dead. According to John, he was not “born of God” and I felt some sorrow for him.

The sorrow comes because I truly believe humanity’s image of God will always fall short without the revelation of who God truly is that only Jesus, the Son of God, can reveal to us. As Jesus himself tells us, “no one knows who the Son is except the Father, or who the Father is except the Son and anyone to whom the Son chooses to reveal him” (Luke 10:22).

By his humble birth taking on our humanity, his baptism in the Jordan taking on our sinful humanity (and first revealing the Trinity), his simple life of selfless ministry teaching and healing, his sacrificial death on the Cross, and his resurrection from the dead, Jesus has revealed to us, finally and fully, who our God really is.

When Jesus died on the Cross, the heavy curtain in the Temple was torn from top to bottom, signifying an end to ritual separation from God, for now, by Jesus’ self-sacrifice, there is no longer any separation between humanity and God. We can see right into the heart of God, and what we see is: humility, gentleness, mercy, compassion, unconditional love, forgiveness and total non-violence. Our God, truly, is love and only love.

“Only the Son knows the Father.” That is why Jesus, as the anointed one, the Messiah, could enter the synagogue where he grew up, and proclaim the prophecy of Isaiah about the coming of the Messiah was being fulfilled by him, in their presence: people held captive by their own emotions and negative attitudes would be freed, the blind would see, the deaf hear, the mute speak, oppressive forces of evil would be banished and the Lord’s Messianic year of favor would begin. That would be the very reign of God here on earth, the life of the resurrection, that Jesus came to inaugurate.

As an aside, there is another sign here of Jesus as the Messiah, as Son of God, as God, and that is his authority to interpret the scriptures. He chooses to stop short (in mid-sentence) of the comment by Isaiah “day of vengeance of our God,” ending instead with the positive “year of the Lord’s favor.” This falls in line with when Jesus also says, “You have heard it said (in the Torah) … but I say to you… (Matthew 5:38-38), setting himself over the Torah. Only the Messiah would dare do that. We can be secure in our belief in Jesus as the Messiah.

Secure also in how loved we are by God, John insists we must now love one another. We do that by keeping the commandments Jesus gave us, which also reveal his authority to re-interpret scripture. Every good Jew knew the grand Shema of Judaism by heart. The orthodox Jews even take literally the teaching to wear it on their arms and on their foreheads, wrapping a leather tong around their arms when they pray, and placing a little amulet on a string on their foreheads, a practice we saw in the airport in Tel Aviv and at the Western Wall.

What Jesus did that was new was reach way back into the Old Testament, into Leviticus 19:18, and retrieve a law buried among many others, easily overlooked by such as the priest and the Levite in the Good Samaritan story, and place it on an equal par with the Grand Shema. From now on, to “love others as we love ourselves,” is as important as it is to love God with our whole being. To transform the 613 laws of Judaism into two, is unique to Jesus, and explains why John could say, “Those who love God must love their brothers and sisters also.”

Saint Mother Teresa of Calcutta puts it very succinctly: “What we would like to do for Jesus, whom we cannot see, we should do for our neighbor, whom we can see, and we will be doing it to Jesus.”

Megan McKenna, in her book on Advent, Christmas and Epiphany, shares a pertinent Jewish folktale from Eastern Europe called “Which Is Truly Righteous?” that speaks to the matters John raises, which I will summarize:

Once upon a time four people died at the very same moment and were met in heaven by an angel who asked them to explain why they should be allowed into the presence of the Holy One. A rabbi said he had studied the Torah day and night, learning it by heart and teaching it to others. The angel replied that was good, but why did he study? – for prestige or true knowledge of God, and made him wait for his case to be decided. A woman next said she was pious, was faithful to her prayers, and had never missed a sabbath celebration. The angel said that was good, but had she done that to be truly holy or for her sense of pride? – and made her wait for her case to be decided. The next, a couple holding hands, were hesitant and apologetic. They tried to study the scriptures and be faithful to the holy days and traditions, but had a hard time doing that as they were innkeepers and found they were always busy attending to the needs of the people who came to them for lodging, making sure their door was always open to those in need whom they treated kindly. The angel smiled, burst into song, and exclaimed, “No need for discussion here. This case is settled.” The gates swung open wide, and they were welcomed in, as they themselves had so often welcomed others on earth.

McKenna continues, “These folks were children of God, revealing a God that is welcoming, kind, merciful, attentive to strangers and those in need. Their actions were holy and proclaimed they believed in and belonged to God.”

The Eucharist is not only an act of faith in a God who is love, and Jesus who is the Messiah and Son of God, but also an experience of God’s unconditional love, forgiving and healing us even as we celebrate, and empowering us to keep God’s commandments by loving others as Jesus has love us.