Living in the Reign

Living in the Reign is the title of a retreat that I love to offer. It of course, alludes to living in the Kingdom of God here and now, the message of today’s gospel.

It also coincides with my episcopal motto, Regnum Dei Intra Vos – the “Kingdom of God is Among You,” taken from verse 17 in this gospel. I chose it with the help of a veteran, holy Oblate missionary priest, Fr. Camillo, who pointed out that this passage is the only place in the gospels where Jesus does not just say that the “kingdom of God is at hand,” or that we are “near to the Kingdom,” but that it is a present reality, in and among us. “Use this passage!” he exclaimed excitedly, and so I did.

The point Jesus is teaching in this gospel is that the kingdom of God is growing slowly, often invisibly, most always quietly. It can be compared to the formation of the Grand Canyon, imperceptibly carved out over eons of time by wind and water erosion, or to the growth of a massive tree from a tiny seed.

A spiritual experience during contemplative prayer as a young Oblate deacon on a thirty-day retreat in Spokane in 1974 gave me a glimpse into this mystery, and how the reign of God would unfold in my life. Fr. Armand Nigro, S.J., the retreat master, had urged us to pray for all the gifts of the Holy Spirit the previous evening. Full of expectant enthusiasm, I set out to do just that the next morning. I sat under an evergreen tree for my holy hour, and tried to be open to receiving those promised gifts of the Spirit. 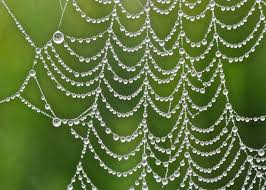 Absolutely nothing happened – it was the most boring, driest, uneventful period of prayer during the whole retreat.  As I sat under the tree, feeling sorry for myself, I noticed a spider’s thread right in front of my nose. I would see it, then not see it, depending on the slight breeze. Suddenly, it was as if I heard these words spoken inside of my head, “My grace is a fine as a spider’s thread. It is always there – most of the time you don’t see it.” That was the answer to my prayer – not bombastic, but quiet and gentle, and the message was clear – that is how God would work in my life, and so it has been.

The book of Wisdom, in the first reading, equates wisdom with the Holy Spirit. We can infer from this that being in touch with the Holy Spirit, being filled with the Spirit, and being wise is all included within the Kingdom of God. Wisdom is different from knowledge that one can obtain from books or some other source. Wisdom is gained by reflecting on one’s life and experience, and learning from that experience.

As the gospel ends, Jesus adds an important comment – he must first endure suffering and be rejected by this generation. That injects redemptive suffering into this mystery of the unfolding of the kingdom of God here and now. God’s plan from the beginning was always to love humanity unconditionally, and if what it would take to do that was the passion of Jesus and his death on the cross, then Jesus freely accepted to make that part of his mission on earth. Now, because of the gift of his life for us, we can see into the heart of God for the first time, and what we see is mercy, humility, compassion, forgiveness, unconditional love and above all, total non-violence.

What this teaches us is that if we can be like Jesus and accept some suffering in our lives without bitterness or resentment, as Jesus did, then we are already in the kingdom of God, for that is the key to the secret of that kingdom.

So, today’s readings highlight three essential elements of the reign of God – the importance of wisdom, the humble, often invisible growth of that kingdom, and the role of redemptive suffering. We can see that kingdom when a married couple achieve intimacy in their relationship during a Marriage Encounter, and when a victim of abuse can forgive her abuser from the heart. We see it unfolding in countless acts of selfless love and service to others.

We are given a model for living in the reign, in the person of St. Margaret of Scotland. Born in Hungary about 1045, she was the daughter of Eadward Athling, heir apparent to the English throne, and Princess Agatha of Hungary. At about the age of 10, she returned to England with her family but was forced back into exile after the Norman Conquest in 1066. In 107, Margaret married Malcolm Canmore, King of Scotland. Margaret greatly influenced King Malcolm III. To her husband and his country, she brought the best of European culture and encouraged many by her life of Christian virtue. She worked for justice and improved conditions for the poor, guided the Celtic church toward strong ties with Rome, rebuilt churches, and brought the Benedictines to Scotland. In 1093 her husband and one son were killed in battle. Already on her deathbed, she died four days later. Margaret was a model of motherhood, one of the few canonized saints to have reared a large family. She was canonized in 1251 and in 1673 was named patron saint of Scotland.

The Eucharist is a foretaste of that heavenly banquet we will enjoy to the full in eternal life, and is a participation already here and now in that kingdom as we listen to the Word of God, and receive the body and blood of Jesus shed for us on the cross, to reveal to us the Father’s love for the world.

May our celebration grant us wisdom, open our eyes to recognize the kingdom unfolding among us, grant us the faith to accept some redemptive suffering in our lives, and above all, help us live in the reign here and now.