A well-known theologian, Deitrich Bonhoeffer, once said:Grace is free, but not cheap. This statement resonates with a song the International singing group Up With Peoplesang as part of their show: Freedom isn’t Free.

These two phrases seem to fit this feast of St. Stephen, the first martyr for his faith in Jesus, the day after Christmas day. We might be surprised and wonder why the Church in her wisdom placed this tragic event so soon after the joyous birth of the saviour.

The reason is we can never separate the crib from the cross, the swaddling cloth from the burial cloth, the Christ child from the Redeemer, faith from love. That is a feature of the painting of the Nativity by Fr. Seiger Köder, who has three crosses flowing above out of the crib that at the bottom has the words INRI written on it. That stands for “Jesus of Nazareth, King of the Jews” that Pilate had written on the cross. Not only that, at the bottom of the painting the figure of Isaiah (who wrote about the suffering servant) has a hand on the manger and is looking at neither Jesus nor Mary, but seems to be focused on the crosses overhead with a look of anguish on his face. It is as if in the midst of this joyful birth he foresees what is in store in the future this Christ-child.

So, a message of today’s feast is to trust in Jesus, let go of our fears, and be ready to join in his suffering for the redemption of the world.

Jesus is very clear in his warning to his disciples: they will be tortured by the Jews, hated because of his name and persecuted. However, he also assured them they would be empowered by his Holy Spirit who will speak through them and strengthen them to endure to the end.

We see those words lived out in the martyrdom of Stephen. Certainly, he was filled with the grace, power and wisdom of the Holy Spirit. He was gifted with a vision of heaven, seeing Jesus and the glory of God, which helped him to endure to the very end, forgiving his enemies and praying for his spirit to be received by his beloved master.

We tend to romanticize and sanitize scripture. The nativity scene is a lot dirtier and smellier than we depict it. Christmas is not just a kids’ holiday. The significance of God among us is life-long. To stand with Jesus is not easy. We are called to live martyrdom in slow motion. Like St. Stephen, we are to make love and forgiveness our basic way of being.

This reading from Acts gives us a glimpse of the early Church after Pentecost, and the immediate conflict with official Judaism. These are Stephen’s words recorded by Luke in Acts 6-7: “You stiff-necked people, always opposing the Holy Spirit as your fathers did before you. In their day, they put to death those who foretold the coming of the Just One. Now you in your turn have become his betrayers and murderers. You who received the law through the ministry of angels have not observed it.” No wonder the Jews were upset with Stephen. Just the opposite of this externalism, Stephen died like Jesus, forgiving those who were killing him. 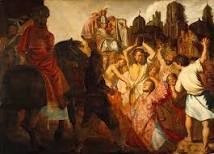 The message for us today is even as we celebrate the birth of the Christ child with joy, we must be always ready to believe in his mission and message, to trust in him whatever comes our way, and to live lives of love and forgiveness as both he and Stephen did, even to the point of martyrdom.

There are some who say there are more Christian martyrs in recent years than ever before in the history of the Church. In the Middle East, thousands are fleeing, becoming refugees, and even killed for their faith. While that may not happen to us, we must be ready to live Calvary in slow motion, to give our lives away in acts of love, service and forgiveness each day – to be Christ to others.

In that process, in allowing our suffering to make us better, not bitter, we will find God will turn all things to the good for those who love him and trust him. One example are grandkids who bonded and came to love each other deeply as their grandfather was slowly dying of cancer over a four-year period. His illness brought his children together more often then they would have otherwise, and the grandchildren got to know each other in a way they never would have otherwise. Now, even though their grandfather has passed away, he still lives on in their love for each other.

The Eucharist is a sharing in the life, death and spirit of the very first martyr, Jesus himself. We who are nourished by his word and receive his Body and Blood are empowered to follow Jesus more closely.

So, inspired by St. Stephen, let us strive to live martyrdom in slow motion, living in the Spirit of love and forgiveness.