At least one American presidential candidate has run for office on the campaign promise that if elected he would bring about a new world order.

Haughty dreams and high hopes notwithstanding, I think it goes without saying that no mere president, let alone a mere human being, is capable of that daunting challenge.

Yet today’s celebration is precisely that – a celebration of one who did bring about a new world order for those who would believe in him – Jesus Christ, the Son of the Living God, whose birth among us two millennia ago we celebrate this day.

The first reading announces Good News: God has redeemed us and brought us salvation in Jesus Christ. God will now reign in our lives so we can live in peace and joy.

The Gospel speaks of the Word of God made flesh as grace and truth, empowering us to live in a different way. 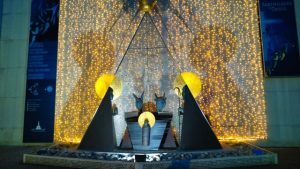 The second reading basically repeats the message that God has sent us Jesus his Son who empowers us to live in God’s reign.

The key words emerging from the readings on this feast of Christmas Day are light, salvation, grace and truth. Finally, the puzzling question that Pilate would ask of the universe at the trial of Jesus, “What is truth?” is answered for all of humanity. The truth is Jesus is the Son of God come into the world as light in our darkness, power in our powerlessness, and grace in our oppressive structures, to bring salvation, a whole new world order, to those who believe.

It is this truth that inspired my motto as an archbishop: Regnum Dei Intro Vos– “The kingdom of God is among you.” This feast of Christmas Day celebrates the awesome truth that something totally new, absolutely groundbreaking, has happened in a way that no one on earth could ever had imagined. A little child born among us is the creator of the universe, the first-born of a whole new world order that happens in the hearts of those who believe in him and live his way of unconditional love.

That, my dear friends, is worth celebrating. Let us believe, rejoice, and allow ourselves to be transformed into his disciples, children of God, members of a new world order.

A radio station manager and a mayor in Fort Wayne, Texas, caught the spirit of this new world order. Amy Hagadorn was a third-grade student in that city who was continually teased by other students for the way she walked due to cerebral palsy. At her mother’s invitation, she entered in a Letter to Santa Claus contesthosted by the local radio station. Her letter read: “Dear Santa Claus, my name is Amy.  I am 9 years old.  I have a problem at school. Can you help me, Santa?  Kids laugh at me because of the way I walk and run and talk. I have cerebral palsy.  I just want one day where no one laughs at me or makes fun of me. Love, Amy.” The manager of the station, Lee Tobin, thought it would be good for the people of Fort Wayne to know of this student and her special request, so he called the local paper who ran a story on her. That story spread across the country and brought in thousands of letters of support to Amy and her family. At her school, teachers and students talked about how bad teasing can be and Amy got her wish for a day without teasing. And that year, the Fort Wayne mayor officially proclaimed December 21st as Amy Jo Hagadorn Day throughout the city.  The mayor explained that by daring to make such a simple wish, Amy taught a universal lesson.  “Everyone,” said the mayor, “wants and deserves to be treated with respect, dignity and warmth.” 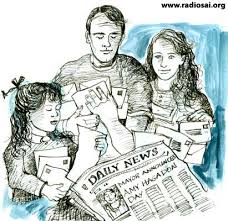 As we celebrate this sacrament and this feast of Christmas, let us open ourselves up to the Spirit of this Christ child and savior who alone can offer us the fullness of life.