The Word of God and Fraternal Correction:

Optional Memorial of the Dedication of the

Basilicas of Saints Peter and Paul

“My house shall be a house of prayer, but you have made it into a den of robbers.”

That statement by Jesus in the gospel today invites us to pray more contemplatively with the Word of God, and to be open to some fraternal correction in our lives.

According to Robert Barron, the Messiah had four distinct roles: to gather all nations to himself; to restore the temple; to overcome the enemies of Israel, and to reign over all creation forever.

We know Jesus, as the Messiah, did indeed gather people from all over to himself; that he did overcome the real enemy of Israel, death itself through the resurrection, and that he is even now reigning over all creation.

In the Gospel, we see Jesus restoring the temple. During the time of Ezekiel, the religious system had become so corrupt the shekinah or glory of the Lord rose up and abandoned the Temple. The Word of God that was sweet to the mouth had truly become bitter to the stomach of any faithful Jew. Jesus was now restoring the temple, not just by driving out the merchants and moneychangers, but also by being himself the Temple where God truly dwells. Plus, the glory of God did return to the temple, not the physical building in Jerusalem at the time of Jesus, but on the early church huddled in the upper room at Pentecost in the form of a strong wind and tongues of fire! We are the new Temple of God.

As children of God who are baptized into Christ Jesus, we are also Temples of the Holy Spirit. The psalm tells us what we should do. The Word of God must be sweet in our mouths also. One of the best ways of allowing that to happen is contemplative prayer based on the Word of God, and delighting in the sweetness of that Word.

We can also cleanse our spiritual temple by a sincere celebration of the Sacrament of Reconciliation, in which we are forgiven our sins, and healed of the bitterness of our sinfulness, that which makes us sin.

That sinfulness would be our painful emotions like anger and bitterness, as well as our negative attitudes such as false pride, stubborn self-will, tendency to control, sense of entitlement, etc. These are deep-seated attitudes and “ways of being” that are like weeds rooted in our human insecurity. That insecurity flows out of the reality of being born into a beautiful but flawed and wounded world, where all of us suffer from some lack of love, and perhaps even trauma.

Many, if not most people, are spiritually blind and unaware of these inner attitudes that affect out behavior, as we act out of our emotions and defects of character. We need others who have the courage to give us honest feedback on our weaknesses, hopefully with compassion and love. That is called “fraternal correction” – a practice that seems to have diminished over the years. In a way, it is what Jesus did for the merchants, money changers and religious leaders of his day, when he cleansed the temple. He told them in no uncertain terms that they were turning the temple, supposed to be a house of prayer, into a den of robbers! May we be open to receiving that kind of correction from others who have the courage to give it to us. 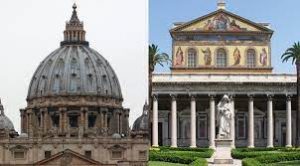 Dedication of the Basilicas of St Peter & Paul

Today’s optional memorial celebrates the dedication of the great basilicas of Rome. Saint Peter’s was begun in 323, over the tomb of the apostle. In 1506, a new church was begun, with Pope Paul V and Michelangelo involved in its development. It was finished and dedicated 120 years later, on November 18, 1626. The 4th century church of St Paul-Outside-the-Walls was destroyed by fire in 1823. A rebuilding project was made possible by contributions received from all over the world. It was consecrated by Pope Pius IX I 1854.

The Eucharist focuses on the Word of God, especially during the Liturgy of the Word, and is scriptural from beginning to the end. And there is a moment of contemplative prayer after communion when in silence we commune with our God in a very intimate way.

So, may our celebration today deepen our belief in Jesus as the Messiah, foster our appreciation for contemplative prayer and strengthen us to be open to fraternal correction in our lives.