Towards The End of Time

A young man was rather nervous about reading in Church, and instead of ending his reading with “The Word of the Lord” he stammered “This is the end of the world” to which the congregation dutifully responded “Thanks be to God.” 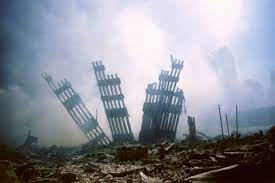 In the gospel today, Jesus addresses the externalism of religion and society, that is, putting emphasis on external things like buildings, money, activity, formal prayers, etc., and depending on that, as the US did on its symbols of military power (Pentagon), economic power (twin towers) and political power (White house). The Romans destroyed the Temple in 70 AD., like the twin towers were on Sept. 11th – not one stone was left on another.

The message today from God’s Word is that readiness, living with God, walking with God, dispels all fear and brings about the reign of God here and now. The first reading speaks of righteousness. That is a right relationship with God, one of faith, living in God’s love, genuine repentance (we have changed whatever we could to live according to God’s will), and peace. For those people, the end means blessing and even has healing in its wings! For them, the words of the psalm apply – make a joyful noise and sing for joy, for the Lord is coming to judge the world.

The New Interpreter’s Bible offers the following penetrating reflections on today’s readings. “In our day, there is a plague of pseudo-religious prophets claiming that the end is at hand. Pastors and teachers will need to distinguish biblical teachings and sound biblical interpretation from the sensational claims carried by the media and popular religious bestsellers. The gospel offers not a way of predicting the end of the world, but the spiritual resources to cope with adversity and hardship.”

On the other hand, following Jesus always exposes the faithful to opposition from the authorities. If in every generation there are those whose religion is simply a form of escapism into the fantasy of futurism, every generation has also had its courageous and prophetic visionaries who devoted themselves completely to Jesus’ call to create community, oppose injustice, work for peace, and make a place for the excluded.

Every generation, therefore, is called back to the teaching of Jesus by the examples of those who have suffered persecution and hardship because they dared to strive to live out Jesus’ call for a community that transcends social barriers, that cares for its least privileged, and that confronts abuses of power and wealth.

These verses allow us to examine two visions of what it means to follow Jesus: one is a focus on prophecies of the future that makes no difference in how one lives in the here and now; the other calls for such a commitment of life that those who dare to embrace it will find themselves persecuted by worldly authorities.

Throughout Acts, God’s faithfulness remains beyond question and is demonstrated repeatedly through the empowerment of the disciples’ witness, wondrous deliverance and repeated triumphs over those who oppose their message. Nevertheless, the dangers and hardships for the faithful are real indeed. Truth is tested and faith is confirmed not in idle speculation but in the crucible of adversity. Those who wish to find a more vibrant religious experience, therefore, should look not for signs of the future but for signals that it is time to live by Jesus’ call for obedience here and now.

Living in the Kingdom is what the life of the Church is all about – worship, loving one another symbolized by the kiss of peace, forgiving and asking for forgiveness, serving one another humbly, and doing so out of loving commitment and perseverance. That is what counts.

An Oblate brother who was playing pool was asked what he would do if he was told that he would die within twenty-four hours. He reflected for a few moments and responded that he would keep on playing pool. He was ready because he was already living in the reign of God. For him the old world had ended when he committed himself to following Jesus totally and fully.

St. Therese of Avila had a saying, “Its heaven all the way to heaven; its hell all the way to hell.” That is a profound insight. It is more a question of learning how to live in the Kingdom of God right here, than of trying to sneak into heaven later on. The old Oblate brother had it right.

The Eucharist that we celebrate now is a foretaste of the heavenly banquet. We are nourished and challenged by God’s Word and invited to share sacramentally in the eternal life God offers us, so that we can go out to help build up the reign of God here and no