One of the most striking teachings of Jesus is to take up our cross and follow him.

All the readings today focus on suffering. And all call us into redemptive suffering ourselves.

In the first, Job is suffering and expressing his pain and confusion to God. The psalm simply echoes his lament. It could have been written by Job himself. And in the gospel, Jesus sets his course purposefully towards Jerusalem, where he knows he will undergo his suffering that we call his passion.

The disciples don’t understand this necessary suffering, and try to both dissuade Jesus, and also resort to violence, wanting to call down fire and brimstone on the Samaritans who refused hospitality to Jesus, an extreme act in that society.

This places us squarely into the mystery of redemptive suffering. There are some lessons in life that we will learn only through suffering. If life is too easy, we remain superficial. As Fr. Richard Rohr OFM often states, it is only either great love or great suffering that is capable of breaking open our tendency to live out of our ego-dramas instead of the Theo-drama to which God calls us. It is often our suffering that produces character, that makes us deep and more compassionate toward others.

Actually, the key to the mystery of the kingdom of God is to be able to accept some inconvenience and suffering in our lives as Jesus did – without resentment or bitterness. Whether that is through forgiveness of some hurt, acceptance of some loss or patient putting up with some inconvenience, when we can be like Jesus, we get to feel like Jesus – peace and joy in the face of suffering.

Today the Church honors someone who truly had an intimate relationship with Jesus Christ, and who followed his teachings to the full:  St. Vincent de Paul, founder of the Congregation of the Missions (Vincentians) and co-founder of the Daughters of Charity. Born in France in 1580, the son of a peasant farmer, Vincent attended university and was ordained at 20. His first inclination was to earn a good income, but appointed to the Queen’s household, he came under the influence of Bérulle (later Cardinal), and became a changed man. Vincent devoted the rest of his life to acts of charity. He organized groups to provide food and clothing for all who were poor: orphans, prostitutes, the sick, the disabled and the homeless. He collected large sums of money for his many projects and his influence spread from France across Europe. He died in 1660, was canonized in 1737 and is patron saint of charitable societies.

In many ways, Vincent was also like Jesus in the gospel, at home with the simple country people, proclaiming the Good News of the kingdom, reaching out to the poor and sick, and being a true shepherd to all under his care. His example has spawned the birth of the St. Vincent de Paul Society, a lay Catholic organisation that aspires to live the gospel message by serving Christ in the poor with love, respect, justice, hope and joy, and by working to shape a more just and compassionate society. It was co-founded around 1848 by then 20-year-old student Frederic Ozanam along with six associates, operates in 140 countries and has over 800,000 members. I am actually privileged to be their Canadian national chaplain. 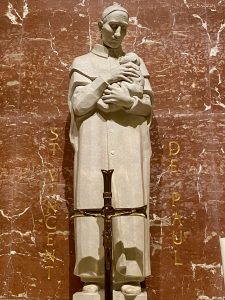 We need the example of St. Vincent reminding us to always be cognizant of the poor in our midst, and to do what we can to alleviate their distress. Here is an excerpt from his writings that speaks for itself:

“Even though the poor are often rough and unrefined, we must not judge them from external appearances nor from the mental gifts they seem to have received. On the contrary, if you consider the poor in the light of faith, then you will observe they are taking the place of the Son of God who chose to be poor. Although in his passion he almost lost the appearance of a man, was considered a fool by the Gentiles and a stumbling block by the Jews, Jesus showed them his mission was to preach to the poor: He sent me to preach the good news to the poor. We also ought to have this same spirit and imitate Christ’s actions, that is, we must take care of the poor, console them, help them, support their cause.” Doesn’t he sound a lot like Pope Francis today?

The Eucharist makes present the suffering love of Jesus, and empowers us to accept some suffering in our lives as he did, without bitterness or resentment, and then our suffering is redemptive and full of meaning and purpose. This we are called to live, as did St. Vincent de Paul.