A Study of Contrasts

“The tax collectors and sinners were all seeking the company of Jesus to hear what he had to say.”

This striking phrase describing the actions of the tax collectors and sinners opens a Gospel account that takes us on a journey into the heart of God by means of some very interesting contrasts. In so doing, we learn more of who our God is, and how we are to be more like God ourselves, as well as how we are to be before God. We are to be merciful and forgiving like God (the theme of Pope Francis’ extraordinary Holy Year of Mercy), and truly repentant before God.

First, we see two very different groups in the Gospel: One group is the tax collectors and sinners; the other is the scribes and the Pharisees.

There are also two perfect numbers involved in this story; 100 sheep and 10 drachmas. These two numbers indicate that God has in mind a kind of perfection, an ideal state for the world, that all would be in his flock and in his reign, and that even one person missing from that scenario leaves it incomplete in a way that the Father finds unacceptable and will go to great lengths to rectify. As such, there is more rejoicing in heaven over one repentant sinner than over the 99 who think they have no need of forgiveness or repentance.

We are also given three images of God in this gospel. First, God is portrayed as a good and caring shepherd who will leave the 99 to go out and search for the one lost sheep. Second, God is portrayed as a woman who turns her whole house upside down to find a lost drachma. Finally, we see a powerful image of God as a loving Father who is able to forgive his errant son even before he leaves home, waits for him to repent and return, runs to greet and hug him when he does so, and then restores him to his former state of son-ship and celebrates his return with great joy. We see that same father patiently pleading with the elder son to also forgive his brother and enter into the celebration. All three images of God include a God who celebrates, who rejoices over a successful search for the lost and the return of a repentant sinner.

This story also reveals two “states of being” towards God. The first is the sinner or younger son w 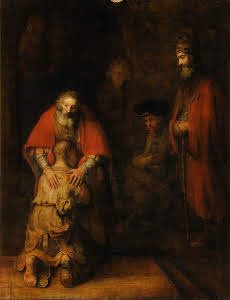 ho harms a relationship through sinful actions and dissolute living. The other is the sinful state of the elder who has not sinned like the younger son, but is full of anger, resentment, envy, and un-forgiveness. His is actually the worst state as he does not even see the sinfulness of his attitude, and how that attitude precludes him from receiving the father’s forgiveness and excludes him from the celebration.

We then learn an important lesson. What truly delights and reaches the heart of the father is repentance. Repentance is a deep willingness to let go of some sinful activity, and return to doing the will of the Father in one’s life. It is a profound movement of the mind, spirit and body of each person.

It is interesting that in the first reading, the people are like the prodigal son – they sin by their idolatry and infidelity, arousing God’s anger and putting Moses into the role of intermediary for the people. In this case, God changes God’s mind and does not punish the people. This is an early revelation that God is not one who wants to punish, but rather wants to forgive and restore relationships.

Saint Paul, in the second reading, touches on the two-fold mission of Jesus: to redeem and to sanctify; to forgive and to heal. On the road to Damascus, Paul’s encounter with Jesus was an experience of that two-fold mission of Jesus. In that dramatic encounter, Paul experienced the forgiveness of Jesus, and through the prayer of Aeneas, Paul received the healing of Jesus that transformed him from a persecutor of the early church to an evangelist proclaiming the Good News of Jesus Christ to especially the Gentile world at that time.

Bob was a long-time member of Alcoholics Anonymous. He met with his sponsor one day to discuss a problem he was having with outbursts of anger and bad temper. That puzzled him because he was being faithful to attending meetings and was trying to work the steps. He was very concerned about this situation because one particular outburst of anger towards his daughter led her to not speak to him for years, and when she had to, she addressed him by his first name, implying that he was no longer his daughter, which was very painful to him. In the discussion with his sponsor, it surfaced that he had never really forgiven his father who was abusive towards him. They had been more or less reconciled before his father died, but he had never really shared his feelings of hurt with his dad. That situation, he now learned, was unfinished business for him, so he resolved to write his deceased father a letter, pouring all the emotions that he had never shared with his father into that letter, and reading it out loud to someone representing his father.

That experience was a break-through for Bob with his father. It was a moment of deep intimacy with his father, and an experience of forgiving his father at a deeper level than ever before. This experience empowered him to contact his daughter, listen to her pain, and apologize to her as he never had before, and he was able to heal that relationship as well. All of this was a process of repentance for him, flowing from a desire to heal the relationships in his life, for which he is truly grateful to this day.

The Eucharist that we celebrate today is an encounter with our truly loving and merciful Father and God. We are forgiven and healed, and sent out to spread the Good news of God’s forgiveness and healing.