“You are who you are – what are you afraid of?”

Franciscan Father Richard Rohr started a retreat for our Oblate community years ago with the startling statement, which along with the gospel today, invites us all to be on a life-long healing journey towards greater self-awareness, wholeness, even holiness.

In that gospel, Jesus teaches his disciples the importance of self-awareness and the reality most human beings struggle with – being able to see, admit and deal with our own faults, instead of so easily focusing on the faults of others.

This is an important issue, as it can have devastating effects on relationships and situations when we are unable to do precisely what Jesus is asking of his disciples – to take the log out of our own eye before we try to remove a splinter from the eye of another.

There is such a thing as cognitive dissonance – which happens when someone gives us feedback that we don’t want to hear or are unable to face. I remember a brother Oblate once telling me, “Sylvain, I’m watching you burn out” but that feedback went in one ear and out the other. I did not take it seriously, ignored it, kept up my pace of life, and in the end, did burn out, leading to a resignation in my life.

A helpful tool that fits this gospel is the Johari Window, which presents us with four different areas of our personality we can work on: Public Arena (what we know about ourselves and what everybody else knows); Private Self (what I alone know about myself); Blind Spot (What others know about us that we either deny or are unaware – the log in our eye), and the Black Hole (what only God knows about us, our True Self, our preciousness in God’s eyes, what Rohr calls the Immortal Diamond).

How can this schema help us? The Private Self is fine – we all have certain things we need to keep to ourselves, and the Public Arena is fine – we function out of this all the time. The Black Hole is the area inviting us into contemplative prayer, during which the Spirit of God can bring about healing in silence and solitude. It is the Blind Spot that is most challenging, calling us to grow into greater self-awareness. We cannot heal what we cannot feel, or will not face. Painful as it may be, we need to make that journey into our blind spot, usually with the help of others who are willing to give us genuine feedback.

This is a life-long journey. One of the participants at a retreat I gave once on my new book Still Green and Growing, was 92-years old – a university professor with two doctorates. She shared after the retreat that during her prayer time, she became aware that she had been emotionally shut-down by her late husband, who just could not handle emotions. With some excitement in her voice, she declared that she still had some growing to do towards greater wholeness and freedom. She booked herself in for a three-day retreat, and later came to celebrate a lifetime confession. She was still green and growing!

At the age of 73, I am still learning things about myself of which I was not aware. One apparently is having a sense of entitlement that has affected some of those around me, a tendency to take advantage of others. Recently, that has been painfully pointed out to me, so the gospel today is right on the money. I have to take a log out of my own eye, before I can try to take a splinter out of the eyes of others. I guess I also am still green and growing, and on this life-long healing journey towards greater self-awareness, wholeness and hopefully holiness.

Actually, the new book I am writing, perhaps has emerged out of this whole scenario of growing and healing at this deeper level. It is to be all about loving ourselves and self-awareness! The title, depending on the publisher, may be “Loving Awareness” because being more self-aware is one way of loving ourselves and living out the commandment Jesus gave us to ‘Love others as we love ourselves.” 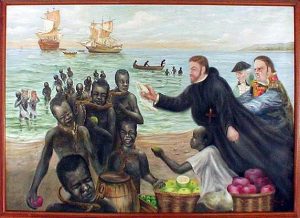 We have a great example of this message being lived in Saint Peter Claver. He was born near Barcelona, Spain, in 1580 and joined the Jesuits in 1600. Inspired by St. Alphonsus Rodriguez, Peter was sent to Cartegena in South America, then the centre of the slave trade. There, Peter tended to newly arrived African slaves with food, water and medicine.

Fr. Gerry LeStrat OMI has been to Cartegena where he saw the huge cement platform where the African slaves landed. They were taken to row upon row of concrete pens, just like cattle. What is especially tragic is that for the most part, the slave traders were Christians, probably Catholic, who found it, like the Pharisees, not that difficult to justify themselves in their dark activity.

Peter Claver would go to this area, force his way through this teeming, suffering humanity to find the sick and minister to them. He would find them on mats of broken pottery and bricks, and clothe those who were naked. Here is a quote from his writings:

“This is how we spoke to them, not with words but with our hands and our actions. And in fact, convinced as they were that they had been brought here to be eaten, any other language would have proved utterly useless. The we sat, or rather knelt, beside them and bathed their faces and bodies with wine. We made every effort to encourage them with friendly gestures and displayed in their presence the emotions that somehow naturally tend to hearten the sick.”

For nearly 40 years, he ministered tirelessly to the slaves, lobbied on their behalf and pleaded for more humane treatment for them. In 1654, ill and neglected by his religious brothers, Peter Claver died. He was canonized in 1888. He is a patron of Colombia and of all missions to black people.

The Eucharist begins with the Penitential Rite, an exercise in self-awareness, and moves on to the experience of the unconditional love of God that hopefully will empower us all to set out on life-long journeys towards greater self-awareness, wholeness and even holiness.