Celebrating Who We Are

The late Anthony de Mello, in The Song of the Bird, recounts this captivating story: A boy found an eagle’s egg and put it in a nest of a barnyard hen. The eaglet hatched with the brood of chicks and grew up with them. All his life the eagle did what the barnyard chicks did, thinking he was one of them. He scratched the earth for worms and insects. He clucked and cackled. And he would thrash its wings and fly a few feet into the air. Years passed and the eagle grew old. One day he saw a magnificent bird far above in the cloudless sky. It glided in graceful majesty among the powerful wind currents, with scarcely a beat of its strong golden wings. The old eagle looked up in awe. “Who’s that?” it asked. “That’s the eagle, the king of the birds,” said his neighbor. “He belongs to the sky. We belong to the earth – we’re chickens.” So, the eagle lived and died a chicken, for that is what he thought he was.

This story, and today’s readings, extend to us a strong invitation to become who we are – the new people of God, nothing short of being saints. This message is very similar to what St. Augustine purportedly told converts being initiated at Easter as they came up for communion – “Receive who you are!”

St. Paul, in his rather strong words to the Corinthians, seems to come at it backwards. First, he upbraids them for not being who they really are, then he tells them who they are. Who they really are is saints who will judge the world and even angels. They are washed in the waters of baptism and joined to Christ by that action, sanctified and made holy by the power of the Holy Spirit, justified and made righteous, in line with God’s will for them.

St. Paul is understandably upset because instead of living out this sublime vocation, their exalted identity, they are stuck in cheating, sexually acting out, dishonesty, infidelity, addictions and wild partying. A far cry from how they should have been behaving as saints living in the reign of God. No wonder Paul took them to task, trying to bring them back to their true selves.

The gospel provides us with the foundational background to this divinely-human reality St Paul is exhorting his flock to live out. What is fascinating is the setting could not be more mundane, ordinary, even uninteresting to a casual observer. An itinerant preacher who is almost homeless stays up all night up in the backwater hill country of an isolated corner of Palestine, then chooses twelve working-class fishermen to carry out a plan only he knew about. 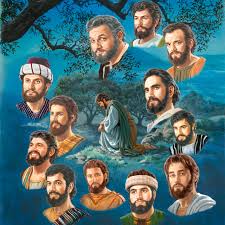 What was happening at a much deeper level is Jesus was modelling for all ages the importance of prayer before making major decisions. If he, the Lord and Savior of the world, found it necessary to spend all night communing with the Father and the Holy Spirit to make sure he chose the right men (even then, Judas managed to get included), how much more so should we make contemplative prayer, communing with Jesus, the Father and the Holy Spirit, a priority in our lives.

Next, Jesus was deliberately initiating a whole new reality, a new people of God, a new Israel that would believe in him as Son of God, follow him closely, strive to become a carbon copy of him as his disciples, and be a leaven to call the whole world back to the Father.

From his choice of these twelve rugged men to his powerless death on the cross, it all did not make sense to anyone trying to rationally decipher what Jesus was about. Only after the resurrection and the sending of the Spirit at Pentecost did the pieces fall together, and the early church blossom, even at the cost of their lives. So successful was this seemingly foolish enterprise and apparent failure that in 2005 Thomas E. Woods, Jr. would publish a scholarly booked entitled How the Catholic Church Built Western Civilization.

In stark contrast to the first reading, psalm 149 literally shines with the essence of that new life in Christ the Church as the Body of Christ is meant to enjoy in this world. We are to sing to the Lord a new song, praise God from the heart, rejoice in God’s love, dance before the Lord, make melody with tambourines and lyre, exult in our glory, shout out high praises of God, sing for joy on our beds even, and above all, strive to be people in whom the Lord takes pleasure and delight.

Over two thousand years, the Church has both lived out the words of this psalm in all its saints, celebrated and unknown, in all kinds of works of charity and exuberant worship, but alas – far too often we have also been like the Corinthians Paul found necessary to chastise and try to call back to their true identity. The recent scandals in the Church are almost a plea for St. Paul to come and upbraid us and challenge us to our roots to return to the purity and innocence of the Apostolic age. We have been chickens when we were meant to be eagles.

After all, we have been washed, sanctified, and justified in the name of the Lord Jesus Christ and in the Spirit of our God.

May the Eucharist we celebrate today be a clarion call reminding us of our true identity, fill us with a spirit of repentance for the times we have failed to live that sublime identity, bring us forgiveness and healing, and transform us into the saints we are meant to be, so we can fly like eagles.