Yearning for intimacy is one thing that God and humans have in common. For God, that was always expressed through covenant relationships.

The liturgy today invites us into an ever-deepening covenant relationship with Jesus that involves following him into even some redemptive suffering.

The first reading from the prophet Jeremiah is all about covenant love. Scott Hahn, a convert to Catholicism, notes God has sought a covenantal, marital relationship with God’s people throughout our salvation history, starting with Adam and Eve (a couple), then Noah (a family), followed by Abraham (a tribe) and then Moses (a holy nation, a people set apart to be an icon of God’s presence on earth). The covenant with King David became, unlike the previous covenants, a covenant of unconditional love finding its fullest expression in Jesus, always considered to be a Son of David, of the lineage of David, born in the City of David.

In the gospel, we see Jesus in the region of Caesarea Philippi in northern Palestine, a crossroads of religions, cultures and economies at that time, asking a question about his identity. Inspired by the Holy Spirit, Peter identifies Jesus correctly as the Christ, the anointed one, the Messiah and Son of the living God. Jesus was the one who fulfilled the prophecy of Jeremiah, and wrote the law of love on our hearts, an intimate covenant relationship.

The reaction of Jesus to this correct identification is not just joy, but also very significant in terms of our celebration today. Jesus identifies Peter as the rock or foundation on which Jesus will build his church, his ecclesia or qahal – a new people set apart to live a true, genuine, heartfelt covenant relationship with God through him. We simply cannot separate Jesus from his body, the Church, the People of God.

One day, people were upset at an on-line headline claiming Pope Francis said it was dangerous to have a personal relationship with Jesus. In spite of being told by one particularly zealous Catholic “It’s all in the headlines!” I asked to see the whole article. There I read Pope Francis cautioned it was not a good idea to try to have a personal relationship with Jesus that is not connected to a community.

I could not agree more, because to do so is actually Protestant spirituality – “me and Jesus” – in which connection to any particular faith community is secondary. That is not Catholic spirituality, right from the mouth of Jesus – who identifies himself with the believing community, his Body. As  important as prayer before the Blessed Sacrament is, the primary presence of Jesus for us is not in the tabernacle, but in our neighbor, where Jesus might be much more difficult to love in practice than in pious prayer before the tabernacle.

On top of that, Jesus establishes forgiveness as the core principle of life in the Church, and of a covenantal relationship with him. Peter is given the keys to the kingdom of heaven, and with them the awesome responsibility of either building up that kingdom through forgiveness, or holding back the growth of that kingdom by withholding forgiveness. This is such a revolutionary development that Jesus cautioned the disciples not to tell anyone he was the Christ, until they would see this teaching lived out by his forgiveness on the Cross.

That lack of understanding is immediately evident in Peter’s negative reaction to the prediction of the passion Jesus shares with them – he could not comprehend how the Son of God, the Christ, the Messiah, would have to suffer and die. So, Jesus addresses not so much Peter, but Satan whose thinking that statement by Peter articulates. It is precisely through the suffering, death and resurrection of Jesus that this new covenant would be established, because on the Cross Jesus would reveal the true, final and complete identity of God as mercy, humility, compassion, unconditional love, forgiveness and total non-violence, an image of God the world still resists to this day.

To sum up, we are invited into an intimate covenant relationship with God our Father through Jesus, Son of the living God. We do so as a community, as the Church, mandated to make forgiveness the core of our lives, and openness to redemptive suffering as one certain way the kingdom of God will be realized in our lives. 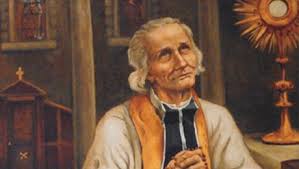 Today, the Church honors St. Jean-Baptiste Vianney, the Curé of Ars. He was the son of a peasant farmer, and a slow and unpromising candidate for the priesthood: he was eventually ordained in 1815 on account of his devoutness rather than any achievement or promise. He was a noted preacher, and a celebrated confessor: such was his fame, and his reputation for insight into his penitents’ souls and their futures, that he had to spend up to eighteen hours a day in the confessional. People would cut pieces from his clothing and his hair as he walked by. For 30 years he served all who came to him: people were healed and converted, and many were given appropriate words of wisdom or advice even before they had explained their predicament.

When he died in 1859 at the age of 73, John Vianney already had the reputation of being a saint. He was canonized in 1925 and is patron of parish priests. His philosophy was to give everything away. The French State recognized his eminence by awarding him the medal of the Légion d’Honneur in 1848, which he sold and gave the money to the poor. A group of us attending an Oblate renewal program at Aix-en-Provence in France were privileged to celebrate the Eucharist in his small chapel, sit in his confessional, and view his uncorrupted body on display in a glass casket behind the altar!

The Eucharist is a banquet celebrating our covenant relationship with Jesus and the Father. May our celebration strengthen our faith in Jesus and empower us to follow him even to the Cross, as it may come to us in our lives, as did St. Jean Vianney.