Lessons on Faith, Humility and Freedom:

Have you ever felt envy at someone else’s success? One response to such a question might well be, “Who hasn’t?” as envy has surely visited all of us at one time or another.

Today’s readings featuring John the Baptist and the apostle John invite us into a strong faith in Jesus that will help us be humble, let go of all sin and experience freedom from false gods in our lives.

Think of the experience of the apostle John and how close he was to Jesus. He lived with Jesus and ministered with him for three years. He was front and center for all of Jesus’ teachings. He sat beside him at the Last Supper, leaning his head against Jesus’ chest, listening to his heart-beat, soaking up his love, and looking out at the world from that perspective. He stood beneath the Cross at Calvary and was commissioned by Jesus to look after Mary. He outran Peter and was the first to enter the empty tomb and believe in the resurrection. John was convinced beyond a doubt that Jesus was the Son of God, the Messiah who was to come, the Saviour of the world. We would do well to adhere to his teachings.

John first of all invites us to pray for a faith as strong as his in Jesus Christ, assuring us that when we pray “according to his will,” our prayers are heard. To pray in Jesus’ name is to pray for what he wants to give us already, so of course our prayer will be answered. What God wants to give us is the Spirit of Jesus, as well as faith, forgiveness and healing. These are the things we should be praying for with confidence.

John also encourages us to live in the truth of who Jesus is, and that means avoiding sin of any kind, though he is careful to point out some sins are less grave than others. The Greek word for sin is hamartia, which means falling short, like an arrow failing to reach its target. That means for us, falling short of being the person God wants us to be. As our faith in Jesus as the truth which is the way to eternal life grows stronger, we will fall short less often. As Sr. Teresita Kambeitz OSU puts it, “God accepts us as we are, but believes in whom we can become.”

Finally, St. John tucks in an important footnote: “Little children, keep yourselves from idols.” When our faith in Jesus Christ wavers, the temptation to find solace in the secondary created goods of possessions, prestige, power and pleasure grows stronger. There is nothing wrong with these things, but when we over-attach to them and expect them to satisfy our deepest needs, they end up becoming addictions, idols or false gods, that can eventually destroy us. And that is the last thing St. John wants us to experience.  So, let us take him at his word and pray daily for a stronger and stronger faith in Jesus that will keep him at the center of our lives, and offer us freedom from any addiction to these false gods.

In the gospel, John the Baptist becomes for us a model of humility. John had his own disciples and was the leader of a reform movement within the Judaism of his day. Some say he might have been associated with the Essenes of Qumran. How natural it would have been for him to experience some almost sibling rivalry with Jesus, his cousin, when it was pointed out that “all were going to him” for baptism.

I remember praying with this passage on a retreat one time, and being profoundly moved and inspired by John’s attitude and answer: “He must increase, but I must decrease.” Only a person with strong faith in God’s love for him or her, one whose basic human needs to be loved, to belong and to be valued are met, could have responded in such a humble, selfless way. What an example and an inspiration he is for us, to have that kind of faith in Jesus that makes itself evident in our lives by humility and selflessness. 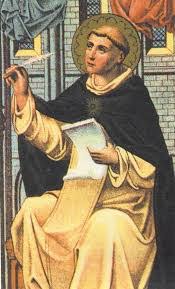 Today the church honors St. Raymond of Penyafort, who is particularly noteworthy for his contribution to canon law. Raymond was a professor of philosophy by the age of 20, and then went on to study canon law. He became an archdeacon in 1219 and a Dominican priest in 1222, travelling through Spain preaching to Moors and Christians. In 1235, having been confessor to Pope Gregory IX, he was appointed archbishop of Tarragona, resigning soon after because of illness. Raymond was responsible for organization of papal decrees, which became the basis for the original code of canon law. His writings were often used as guidelines for the administration of the sacrament of penance (reconciliation).  A contemporary of Thomas Aquinas, he encouraged Thomas to write the Summa Contra Gentiles. While master general of the Dominicans, Raymond revised the order’s constitution, in effect until 1924. He died in Barcelona on January 6, 1275 and was canonized in 1601. He is patron saint of lawyers, including canon lawyers.

The Eucharist is a great act of faith in Jesus as the Bread of Life, and also a humble meal as simple gifts of bread and wine are transformed by the power of the Holy Spirit into the body and blood of Jesus. May our celebration strengthen our faith in Jesus Christ, and empower us to lead lives of selfless love.