HOMILY FEAST OF THE EPIPHANY

In the fall of 2009, a couple from the Sageeng First Nations won the largest single lottery prize ever in Canada. They went into seclusion for several days as speculation swirled about how they would spend the money. Predictions varied widely. Then slowly, as the days went by, we began to hear how they were helping not just their family, but also the community. The husband was recovering from a stroke, so that was their first priority. But then came reports of this couple creating community improvement work projects and bringing in new housing to their community. The last report on the CBC morning news was they were involved with a Catholic parish in Winnipeg distributing food hampers for Christmas. What a heartwarming response this couple demonstrates to having won a jackpot.

My friends, the greatest jackpot of all is the news of the birth of Christ into our world. What is our response to that news? Can it be as positive and as heartfelt as that of this couple, and especially of the Magi whom we celebrate on this feast of the Epiphany?

This feast is somewhat like a diamond with different facets that reveal themselves on closer inspection and invite us to a response. We are encouraged by this feast to be open to everyday epiphanies, to finding God at work in the everyday aspects of our lives, because God is first of all always seeking us. God is always planting seeds in our hearts to get us to seek him, as he used the star to entice the Magi.

We are also invited to move from an attitude of exclusivity to inclusivity. We are being asked to shift from any addiction to power, position and possessions, to a personal relationship with God. This feast also asks us to focus less on the institution of the Temple and more on life as a journey of discovery and learning about Jesus. Ultimately this feast asks us to respond to the birth of Jesus and his revelation as savior of the world with heartfelt love and worship.

In setting the context for today’s gospel proclamation about the Magi, the prophet Isaiah in the first reading states there will be light dawning in our darkness, that the glory of God will appear over us.  There will be a gathering of people coming together, he goes on, and we will be a new, transformed people who will be a sign and a light to the whole world. We will experience radiant joy and praise our God for all God has done among us. That is a most appropriate response.

Turning now to the gospel, we see another kind of response. We find that early in this story, Matthew wants to portray the Jewish leaders as hypocrites who “say, but do not act on their knowledge.” They knew the prophecy about the Messiah being born in Bethlehem of Judea and gave the right answer but then allowed material concerns overshadow that knowledge years later. Herod is also a hypocrite when he asks about the child with murder in his heart. Matthew will consider hypocrisy the chief sin of the Jewish leadership, already present in their initial encounter with Jesus. By contrast, the Magi are obedient in following the star and act rather than merely hear. 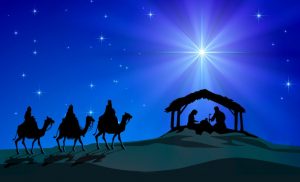 The Magi’s inquiry about the “King of the Jews” is both a reminder that Jesus is the royal heir of the Davidic promises and an anticipation of his ministry proclaiming the kingdom of God. It also anticipates the passion story in which he will be crucified as “King of the Jews”. The announcement, made by gentiles, triggers the conflict of two kingdoms that dominates the Gospel, two very different responses to the birth of the Christ Child among us.

The response Paul is seeking in the second reading is oneness and unity. For Paul, the mystery formally hidden has been revealed. All nations will share in the promised salvation and all nations shall become one body in Christ. Paul moves beyond the words of the scribes about a ruler who will shepherd Israel, to the prophecy of Isaiah – this ruler will bring universal salvation to the whole world, and overcome deadly divisions. There is inclusivity now where there was exclusivity. We must now work towards the unity of all human beings as one human race, and strive to become one in Christ.

A December 2009 issue of the Prairie Messenger carried an article on a restorative justice conference held in Ottawa. Restorative justice is a beautiful response to the Good News of Jesus Christ. One of the speakers at the conference was Canada Correctional Services community engagement assistant commissioner, Rev. Pierre Allard. After his brother André was brutally murdered and abandoned on the south side of Montreal, Allard began the spiritual search that led to his commitment to restorative justice. Through the scriptures, he came to see that restorative justice goes beyond categories of guilty or not guilty. It is a transformative approach that calls us to embrace the victim, to embrace the community that has been hurt and embrace the perpetrator who also needs healing.  Allard’s journey led him into a life-changing process of learning to forgive the murderer of his brother so that he would not carry anger for the rest of his life. He has subsequently worked in Rwanda for two years, bringing about healing and reconciliation to many after the genocide there. His message is truly an invitation to respond to the Good News in a very practical way in our lives through forgiveness and healing.

The Eucharist is itself an epiphany, an event in which Jesus reveals himself to us through his presence in the Word that we proclaim, and who shares himself with us in the bread and wine that we receive.

May our celebration today empower us to respond to the revelation of God’s love for all humanity as did the Magi thousands of years ago, with genuine heartfelt faith and love expressed through joyful worship and lives of selfless service.