From Hard Laws to Warm Grace and Truth

I think these two imaginary scenarios connect with what St. John had in mind as he was writing both the letter and the gospel we hear today, inviting us to live as children of God with joyful faith in Jesus, not just as dutiful members of our particular religion.

St. John differs from the authors of the Synoptic gospels in that he is much more a theologian of mystery, mysticism, memory and symbolism. John is less hard and fast on historical facts then those authors (especially Mark), and relies much more on stories and signs to convey his message of this monumental breaking-into-human-history of God the Father’s love in the person of Jesus Christ. For example, he is so excited about the sending of the Holy Spirit at Pentecost that he places the latter event on the evening of the resurrection of Jesus! Why wait fifty days – he wants us to experience the Holy Spirit now! He also provides us with the reason for our joy.

John writes as an elder, a wise old man, a King in terms of male spirituality, who has had a life-time to reflect on the meaning of the mystery of God at work in     humble, mysterious ways through the Incarnation. In exile on the Island of Patmos because of his faith in that same Jesus, he finds himself pondering the difference between the more institutionalized, systematic temple-sacrifice based religion of the Jews of his day, and the more personal, mystical, relational spiritualty and religion that has developed in the early Christian community following the Annunciation, Visitation, Incarnation, ministry of Jesus, Passion, Death and Resurrection, and the sending of the Holy Spirit at Pentecost. In so doing, he quietly invites us to prayerfully ponder these same mysteries, and incorporate their import into our own lives to deepen the maturity of our own faith.

John’s musings center on the difference of grace and truth from adherence to the law, which for the Jews had become centered more on the Talmud and Mishnah (additional laws and rabbinic commentaries on those laws) than on the Torah itself or on the Prophets. As our Israeli guide admitted during our pilgrimage in 2016, the main question for the people to their rabbi was not a moral stance but a concern about what they had to do to be a good Jew – hence the focus on keeping rules and regulations, and choosing a rabbi who would be closer to their own liking.

John, on the other hand, speaks of having been given “grace upon grace.” That grace is the power of the Holy Spirit given to us as a love of God powerful enough to transform our hearts into those who relate to God the Father as God’s own children, in an intimate relationship with God. When that is our foundation, resting secure in the Father’s love is much more important than worrying about what rules to keep as a way of earning God’s love. Those becomes insignificant and can fade out of our consciousness. What freedom there is in that, as well as joy!

John then speaks of living in the truth, of being grounded in the truth of that love of God that then becomes a light to show us the way to live and move and have our being in God with a certitude and clarity of thought that again frees us from the limitations and constraints of keeping rules and regulations – they are simply no longer that necessary, other than to serve as a guide for beginners in the way of spirituality.

The danger of a religious practice based on law and not on love came home to me again during our recent pilgrimage to the Holy Land and a tour of Shiloh. Shiloh is where the Israelites were first able to construct a transitional tabernacle one step up from the portable tabernacle they carried with them for forty years in the wilderness before entering the Promised Land.

Our Israeli guide at that site was carrying a pistol because he was living in an illegal Jewish settlement on Palestinian territory. When I asked him how he could justify that action, he replied simply he was “living by a higher law.” Ironically, that day the readings were about God promising land to the Israelis, but at the end of the same chapter, God admonishes them to care for the aliens in their midst, to respect their rights, to welcome them and provide for their needs. It seems our guide very conveniently ignores that passage while focusing only on the first part. A question we can ask ourselves is how we might be doing the same thing, if we are stressing the law rather than our relationship with God. 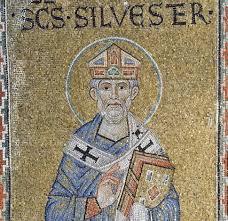 Today the church invites us to honor St. Pope Sylvester, who in his own way lived these readings. Sylvester was the first pope to be elected after the Edict of Milan granted the Christian religion recognition and freedom. He led the Church as bishop of Rome for almost 21 years. Huge basilicas were built during Sylvester’s reign by Emperor Constantine and various other leaders. Sylvester was a strong defender of the Church against heresies. The first general council was held at Nicea during his pontificate; the ‘Nicene Creed’ was formulated at this council. Sylvester died in 335.

The Eucharist does have some requirements and cultic requirements such as the kind of wine, type of bread and fasting for an hour – but these should never overshadow our intimate, personal, prayerful relationship with our loving Father and his Son whom he sent among us as our brother.

May our celebration strengthen our faith in Jesus as our Lord and Saviour, fill us with joy and empower us to love others as we have been loved.