“This is where your heart is,” said the teacher, pointing to his chest. “Mine is where I sit down,” a little boy called from the back of the class. “Whatever gave you that idea?” asked the teacher. “Well,” the youngster replied, “every time I do something good, my grandmother pats me there and says, “Bless your little heart.”

What three titles of Jesus did you receive when you were baptized?

Live your baptism as priests, prophets and shepherd kings.

The readings today teach us much about Christ who was Priest, Prophet and King, and in doing so, about us, we who seek to follow him.

Micah, who wrote the first reading, was a rough peasant who denounced the Jews for their false pride, greed and corruption, and saw the upcoming destruction of Jerusalem as punishment. He announces the coming of a new kind of king yet doesn’t even call him king; but rather someone who will rule with humility, honesty and integrity. That is real leadership, and that one is Jesus, who fulfilled Micah’s prophecy as a shepherd king, as one who truly cared, and who is now our security and the source of our peace, if we but follow him.

The second reading speaks of a new kind of priest, one who realises that it is not ritual ceremony and sacrifice that pleases God, but the total offering of one’s self in humble obedience. Jesus is that kind of priest who came to do his Father’s will, even to the point of accepting death on the Cross. 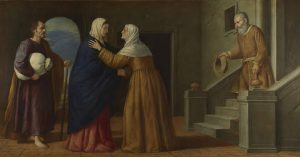 Turning to the Gospel story of the Visitation, Jesus announces even before his birth the coming of God’s kingdom and the fulfilment of God’s promise to the poor. John the Baptist leaps for joy in the womb of Elizabeth. A true prophet is one who speaks the truth. That truth often disturbed the rich, who resisted change, but gave joy and hope to the poor.

In that same story, we see the mystery of a visit or encounter in which the one who visits learns more about her self from the one who is visited. One painting of the Visitation pictures two humble, ordinary, unknown women from small villages in the backwoods of Israel greeting each other on a road. What could be more ordinary or of less notice to the world than this scene? Yet God is at work in these two women in a way that will change human history, as Elizabeth confirms Mary in her role as mother of the Messiah.

It will be the same with us as we seek to live out our own baptism and follow Jesus. As we try to care like Jesus and Mary; to give ourselves totally to the will of the Father like Mary and Jesus; and to speak his truth to an unbelieving world, we will hear from others, “Oh you Christians”, or “Oh you Catholics,” and we will realize again that our standards and values are not those of the world, but those of the Son of Man who came to live among us.

Corbin Eddy, in his reflection for this Sunday, recounts that one day on his CBC radio show, Clyde Gilmour played a song written by Oscar Brand that he found on an album that was out of print. It starts with Mary fussing. “What color is my son going to be?” she asks, because she doesn’t know the color of God. The next verse has Joseph worrying. “It’s going to be very clear that he’s not going to look like me because I’m not his father. And is everybody going to know, just looking at him, that he’s not mine? What is he going to look like?” The chorus, which is sung by children, goes, “Who knows the color of God? – Black, white, yellow or red, all or any or none of the above. Who knows the color of God knows the color of love.”

Jesus – son of Joseph? Son of David? Fulfillment of prophecy? Israelite? Yes and no, because Jesus is more than anything they could have hoped for. He is Son of God, everyone’s brother. Throughout history artists have portrayed him with every possible skin tone because Jesus is bigger than anything that we can name or picture. The color of Jesus is the color of love. And that must be our color as well, we who believe in him, follow him and proclaim him to the world.

Some time back a team gave a Christopher Leadership Course for youth to a group of young people in the north. Months later I checked with Marie, the students’ teacher to see what effect the course had on the students. Not only were they flying high at the end of the course, she related, but the shyest student in the class had gained great confidence and was taking on some leadership roles in the school. He was much happier, doing better in his courses, and showing a side of his personality that was a joy to behold. The Visitation, I thought –is still happening today. God is still at work in very humble ways in those who believe in him, and come to believe more in themselves.

The Eucharist is a humble ordinary meal that transforms us into the Body of Christ and empowers us to go out to live the Word as priests, prophets and shepherd kings.

Today, the fourth Sunday of Advent, we are renewed in our faith in Jesus who is: The Just King; The Selfless Priest, The True Prophet, the one who did the Father’s will. We renew our faith in Jesus who is the source of our security and our peace and our joy. We commit ourselves to respond like Mary and to live our own baptism, in total trust and loving service as priests, prophets and shepherd kings.