Have you ever wished you were further along your spiritual path than you are, still struggling with some sin and sinfulness in your life?

If so, you are in good company. St. Paul in his letter to the Romans shares his inner struggle with the power of sin in his life. In the end, he cries out, “Who will deliver me?” then he places himself in the hands of Jesus as his savior, and is grateful for the gift of salvation.

For seven chapters, according to The Word Among Us, Paul has been laying out one long theological argument: the gospel he preaches is “the power of God for the salvation of everyone who believes.” (Romans 1:16). In verse after verse, he has demonstrated that there is no difference between Jews and Gentiles when it comes to faith. Everyone has sinned. Everyone needs salvation. And that salvation has been freely given to everyone through Jesus’ death and resurrection.

Now, as he approaches the end of his argument, Paul shifts his tone. Instead of Paul the careful theologian, we meet Paul the passionate believer. Reflecting on his own experience of the battle between sin and righteousness, he confesses that he may want to do good but is not always able to carry it out. “Evil is at hand,” he says, always ready to thwart his determination to be holy (Romans 7:2w1). Finally, in a cry of exasperation and frustration, he calls out, “Miserable one that I am! Who will deliver me from this mortal body?” (7:24)

Jesus, that’s who! “Thanks be to God through Jesus Christ our Lord,” Paul proclaims (Romans 7:25).

In this passage, Paul seems to be repeating what he has said all along, only now he is saying it personally, joyfully, and filled with gratitude for the gift of salvation. Of course, Paul is still teaching. He is using his own experience to bring his teaching to life.

This was Paul’s way of showing he wasn’t just teaching abstract theories. Everything he said up to this point mattered deeply to him, and he wanted it to matter to everyone else as well.

Jesus matters! It may sound obvious, but that doesn’t make it any less true. His gospel is our salvation from the very real sins we commit. His mercy is our hope for peace and comfort in the battle against sin. His love – a real love that we can sense in our heart and in the people around us – is the foundation for our life.

So, when temptation comes fast and furious or when frustration or guilt or anxiety feels like a millstone around our neck, remember Paul. Remember his teaching, but remember also his struggle and his faith. Then cry out with him, “Thanks be to God through Jesus Christ our Lord!”

Many people are enthralled by a Deist view of God, whereby God is a distant and aloof first cause of the universe, uninvolved with the world he has made. At a recent meeting of a certain Catholic organization, one of the participants informed me that eighty percent of the members of his region in Quebec did not want any spirituality, prayer or mention of Christ in their meetings. They want a more general “society of service”. There is that deist view of God Barron mentions.

I think there is a need to educate them that St. Thomas Aquinas taught God is in all things “by essence, presence, and power,” and that God providentially cares for every aspect of God’s creation. Therefore, we should expect to see signs of his God’s presence and activity in nature, in history, and in human affairs.

And once we see, we are meant to speak! In a way, followers of Jesus are not looking at the signs of the times for their own benefit, but rather that they might share their prophetic perspective with everyone else. So, look around, look with attention, look with the eyes of faith!

A teacher at an adult learning centre in the city shared with us recently how she found herself drained by the lack of interest in learning and in life of her students, as well as the effort needed to, as she put it, “lift their spirits up.” The one class she enjoyed was made up of immigrants, who had a whole different, more enthusiastic attitude towards their studies.

Looking at this scenario with the eyes of faith, I suspect these students lack hope because they do not have an infinite horizon of faith that will give their lives more purpose and perspective. All they have is what happens that day, and if their boy or girlfriend breaks up with them, it feels like the end of the world – some may even take their own lives!

Even something as simple as the question in the old catechism some of us grew up with, “Why did God make me?” and the answer, “To know, love and serve God in this life, and to be infinitely happy with him in the next” is that bigger picture, larger story, meta-narrative that will provide us with an infinite horizon of faith and instill within us a sense of hope. It is like the woman who requested in her will to be buried with a fork in her hand, because her mother always told her, “Keep your fork, the best is yet to come.” 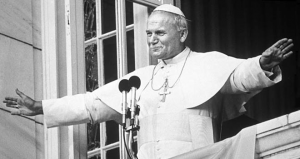 Today we honor St. John Paul II. Karol Józef Wojtyla was born in Poland in 1920. As Archbishop of Krakov, he made an important contribution to drafting the Constitution Gaudium et Spes at the Second Vatican Council. As pope, his love for young people brought him to establish the World Youth Days which occurred 19 times during his pontificate. In 1984, JP II became the first pope to step foot on Canadian soil when he launched a 12-day pastoral visit. John Paul II’s pontificate, one of the longest in the history of the Church, lasted nearly 27 years. He died on April 2nd, 2005, the vigil of Divine Mercy Sunday. JP II was canonized on April 27th, 2014 by Pope Francis. St John Paul II is the patron saint of World Youth Day. In Canada April 2nd is known nationally as John Paul II Day.

The Eucharist is a sharing in the sacrifice of the one who out of faith and trust in the Father’s love, freely gave his life for us. May our celebration deepen our faith, help us let go of any sin in our lives, and empower us to see the world with the eyes of faith, hope and love.