On Being Good and Ready:

Optional Memorial of St. Paul of the Cross

In the words of Bishop Robert Barron, in today’s Gospel Jesus urges us to be ready for his second coming, similar to John the Baptist preparing us: “Make ready the way of the Lord, clear him a straight path.” He is saying his job is to prepare for the mighty coming of the Lord. A change is coming, a revolution is on the way, a disaster (the destruction of the old) is about to happen. Prepare the way of the Lord.

And what is the manner of preparation? It is a baptism of repentance. Baptism—an immersion in water—reminded first-century Jews of the exodus, passing through the Red Sea, leaving the ways of slavery behind.

Repentance (metanoia) – is going beyond the mind you have now – putting on our highest mind. How our minds are conditioned by the fallen world! How our expectations are shaped, stunted by what has gone before. The world of Tiberius, Pilate, Herod and Caiaphas, the world of Hollywood, Internet and Facebook, the world of ultra-nationalism, racism, colonization and multi-national corporations – has shaped our imagination. It’s time, John is saying, for a new mind, a new set of eyes, a new kind of expectation. God is about to act! We must be ready!

St. Paul, in a rather dense theological message to the Romans in the first reading, reminds us of the reality of sin and evil in our world, of which we are all too aware. As Pope Benedict once said, “Evil comes from a freedom created, from a freedom abused” (General Audience, December 3, 2008). But more important, Paul stresses that good comes from God, and God’s grace abounds for us, more powerful than any evil. According to Benedict XVI, God came in the person of Jesus Christ in order to offer “a new source of good” for all.

Part of being awake, alert and ready, is to choose goodness today, to reject anything opposed to good that rises within us, and to ask for the grace to be healed of it. God’s grace is so much more abundant and powerful and effective than any sin we see. We can choose to immerse ourselves in the grace that God pours out, which God does, always and without fail.

The importance of being awake, alert, ready and waiting is one of the late spiritual writer Anthony de Mello’s favorite theme. We are to be ready to open the door for Jesus whenever he comes and knocks. He must be our main priority. There is a saying, “Where we spend our time and money reveals what is important to us.”

In summary form, our time and money must be focused and spent on keeping the commandments to love, on living the Beatitudes, on growing our virtues, and on striving for a balance of action and contemplation in our lives. The Centre for Action and Contemplation founded by Franciscan Fr. Richard Rohr in Albuquerque, New Mexico, can serve as a model for us.

That wonderful line in the gospel, “and he will come and serve them” reminds me of Lillian Yonkers who was president of the Oblate School of Theology some years ago. Our group of priests and sisters taking the sabbatical program Ministry to Ministers nearby were told she would be attending our closing banquet. Full of expectation, we gathered for the banquet. A place was set for her, but it was empty and we were surprised when the director said the blessing without her. Suddenly, she came out of the kitchen with an apron on, and served our group for the rest of the evening. We were delighted and touched that the president of OST would attend our banquet, but as a servant. 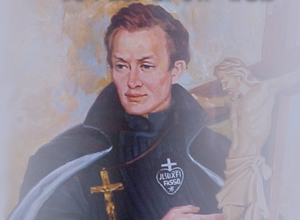 St Paul of the Cross

St. Paul of the Cross, whom we honor today, is another example for us. Born in northern Italy in 1694, he experienced conversion at 15 and began a lifetime devotion to contemplative prayer and austerity. After having had several visions, he determined that his vocation was to found an order dedicated to the Passion of our Lord. Officials declared the visions authentic and Paul withdrew to write a rule. He was joined by his brother, who remained with him for the rest of his life. Paul was known as a “walking saint”: when he walked, crowds pressed in on him, hoping to get a piece of his habit as a relic, or to ask for a cure or a favor. By 1747, the Passionists had three houses and were preaching missions throughout Italy. At his death in 1775, Paul was establishing a congregation of Passionist nuns.

The Eucharist is a foretaste of the eternal banquet that awaits us, but more – it is the Lord serving us even now, sharing his Word with us, and nourishing us with his own body and blood.

May our celebration help us be “good and ready” – strengthen our faith, deepen our hope and empower us to share God’s love with the world as we live in the kingdom of God here and now.