Genuine Faith and Hope versus Unbelief and Religious Rage

One of the more negative traits of our modern society is road rage that often becomes violent and at times even deadly.

In the gospel today, Jesus runs into religious rage that was almost fatal for him. What was that all about? That incident invites us to reflect on the depth of our faith – how would we have reacted to those words addressed to us today? How deep and genuine is our faith and hope?

The gospel begins innocently enough. Jesus simply shares with his townspeople the truth of who he is, the Messiah or anointed one sent to fulfill the prophecy of Isaiah: heal the lame, give sight to the blind, set the downtrodden free and proclaim his presence signals a jubilee year – the in-breaking of the kingdom of God into the world. What is truly interesting and significant is these words, spoken at the beginning of his ministry, are similar to the words of Jesus to his disciples near the end of his ministry (When they fed the hungry, gave drink to the thirsty, clothed the naked, cared for the sick, and visited those in prison – they did that to him – Mt 25). 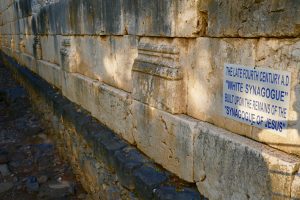 His audience was very religious and duly worshipping God in the synagogue. They were impressed by his words, and should have rejoiced in what he was announcing, but just the opposite happened: a dramatic shift in tone took place, they were enraged at his comments, and quickly morphed into a mindless mob intent on killing him! How could that be? What really happened there?

I believe they reacted with rage because Jesus pointed out the painful truth of their false religiosity behind which was hidden their greed, jealousy, false pride, stubborn self-will and not really caring for the poor. Dare we say they had become totally attached, even addicted, to a self-serving, feel-good and look-good religion that was actually dead, inert, and not transformative at all, which is the real goal of faith? It is probably safe to say they were not really living that mandate of Mt 25, and instead, relying on an easier, safer and neater religious worship to justify themselves.

I remember reading about a movie where a dutiful Catholic, connected with the Mafia, was attending a baptism in the local church. The narrative flashes back and forth between the scenes of the baptism ritual in which he was participating, and the scenes of a crime being committed at the same time, carried out under his orders. This is perhaps an extreme case, but I suspect the “good” townspeople Jesus compared unfavorably to a pagan widow and a Syrian leper, could not admit the truth of their unbelief and hypocrisy, were too deep into denial to deal with their issues, and lashed out at him in their insecurity, as they did to most of the prophets before him.

This is where humble faith and honest self-awareness can make all the difference. There are no truly righteous persons – we are all sinners in need of forgiveness and healing, or metanoia and transformation. We need the attitude of St. Peter when he first met Jesus at the miraculous catch of fish – “Depart from me, Lord, for I am a sinful man!” The stronger the sun, the more we see our shadow – likewise, the closer we are to Jesus, the more we will see our need for what only he can offer.

The first reading is not that closely linked to the gospel, but does connect on a level of faith. Those who truly believe in Jesus risen from the dead will have hope in the face of death. They will not stay stuck in grief like those who have no hope, but be able to grieve and mourn their losses, accept their loss, not cling to their loved ones, and be able to finally give them back to God so that they can receive their spirit to be with them in a new way.

Garry and Gloria are faith-filled friends who lost their daughter to a mysterious disease at an early age. They were devastated by that loss they were powerless to avert. Gloria cried for a whole year, then was involved in an accident leading her into a near-death experience filled with light and warmth, during which she met her parents and their daughter. They now live with the quiet hope and surety they will be reunited with their daughter one day, and even now sense her presence with them in a spiritual way.

The Eucharist is an act of faith in the real presence of the crucified-risen Lord through Word and Sacrament. Those who celebrate it sincerely will experience both forgiveness and healing, and be transformed into the Body of Christ called to serve the world with peace and joy in their hearts.