Faith in Jesus as the Bread of Life:

“Moses said to the Lord” and “Jesus withdrew in a boat to a deserted place by himself.”

Those two quotes from the readings today encourage us to deepen our faith in Jesus through genuine, heartfelt prayer, as the Bread of Life.

If the classical definition of prayer is to “raise up whatever is in our hearts and minds to God,” then certainly Moses in the first reading is praying in a classical way. His prayer is striking in its humble honesty and sincerity, its genuine sharing of how heavy his burden of leading these ungracious people was, and his feelings of anguish, frustration and being loaded down with the responsibility God gave him.

The people were complaining, and stubborn in their griping – they wanted something other than what God was giving them to help them survive in the wilderness. They had entered into nostalgia, defined as comparing the worst of today with the best of the past. If Moses could pray this way, in his situation, that should free us to also share our thoughts and emotions, whatever they are, with God in our prayer.

For its part, the psalm not only encourages us to sing with joy to God our help, but also gives voice to the emotions God was feeling about God’s people – God’s desire for them to walk in God’s ways. One can feel God’s frustration at them, and what God must feel about us today, as so many stubbornly do their own will and walk in their own path rather than God’s, causing, of course, no end of trouble and problems in our world today.

In the gospel, we see the irony of the disciples wondering where they would get enough bread for the crowds, when they are in the presence of the Bread of Life, the only one who can truly satisfy the deepest yearnings of the human heart for love, belonging, worth, identity, and purpose. The numbers five loaves and two fish add up to seven, symbolizing wholeness, infinity, completion. The fact that there were twelve baskets full left over is a clear indication, to this Jewish audience, that Jesus was the Messiah, the one who would fulfill their religious system in a way that the temple sacrificial cult never could. They were to grasp that the false gods their ancestors continually turned to, possessions and pleasure, prestige and fame, power and control, would never even come close to satisfying their deepest desires.

Perhaps the reason Jesus went away by himself after learning his cousin John the Baptist had been killed, was to grieve and mourn his loss. Could this also be a gentle hint to us of the need to grieve and mourn the loss of our attachment to these same false gods in our lives, our favorite, pet and often hidden sins, that we have allowed to claim our allegiance all too often? After all, good spirituality is all about letting go, and we have to let go, or as St. Paul puts it, “crucify” anything in our lives that does not align with the will of God and teachings of Jesus. 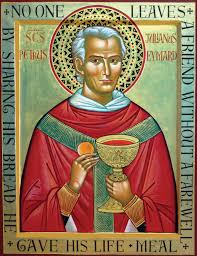 Today the church has an option to honor St. Peter Julian Eymard, who initially entered an Oblate novitiate. Sent home to die from illness, Julian recovered and joined the diocesan clergy in Grenoble. Ordained in 1834, he was assigned to a mission church and was a devoted pastor. Feeling called to the missions, he transferred to the Marists and in 1851 established a group of men dedicated to adoration of the Blessed Sacrament. By 1863 Rome had approved the Congregation of the Blessed Sacrament, whose charism is to promote the significance of the Eucharist for Christian living. Eymard believed both prayer and works of charity are essential to the priestly life. Accordingly, the congregation worked with the very poor, preparing them to receive communion, but also caring for their material needs (which would have made him a good Oblate). Eymard is considered a pioneer in the rediscovery of the “bread of life” and in his call to involve laypersons more actively in the life of the Church. He died on August 1, 1868, and was canonized by Pope John XXIII in 1962.

The Eucharist is our multiplication of the loaves in which Jesus teaches us, forgives us, heals us, and sends us out to be his disciples in today’s world. May our celebration strengthen our faith in Jesus, and the depth and genuineness of our prayer, so that we can pray much more like Moses, enter more readily into contemplative prayer like Jesus himself, and then also, like him, be bread for the world.