The Power of Ritual and Faith –

It is common to think love supports marriage. Often, however, it is the other way around – marital commitment will support love, especially in tough times.

The readings today bring together two important aspects of faith: ritual and trust.

The first reading from Leviticus introduces both.  God tells Moses, “When you enter the land that I am giving you and you reap its harvest … bring a sheaf” (Lev 23:10). Notice God says “when” you come into the land, not “if.” There are many things in life we can’t control – only God can make accurate predictions about what will and won’t happen.

Ever faithful to God’s own promises, God knew the Israelites would enter the Promised Land. All God asked for in return was their trust, demonstrated by an offering of a “sheaf” of wheat. This sheaf was to come from the first fruits of their harvest – the very first ripening of grain. They weren’t to wait until they had gathered all of the harvest; they were to show their trust that God would bless the rest of the crop.

It is the same for us. We can find it hard to trust when we, or our loved ones, struggle with life despite our prayers. So how can we bring a sheaf or continue to trust in God? By recalling how faithful God has been in the past. We can use our personal history as a starting point, and then proclaim with the psalmist, “I believe I shall see the Lord’s goodness” (Ps 27:13) In any moment, we can bring a sheaf of trust to God.

God then outlines for Moses a series of rituals or appointed festivals they are to celebrate as times of holy convocation, including the feast of unleavened bread and days of atonement, as well as burnt offerings and grain offerings, sacrifices and drink offerings, each on its proper day.

These rubrics remind us of the power of ritual, ceremony and gestures that go beyond words to influence and bring about change in one’s life, to create a liminal space in one’s life in which change and transformation can take place.

Franciscan Fr. Richard Rohr has a vision to change the world in five generations, starting with men. Aware that young men were in trouble because they were uninitiated, not blessed by their elders, and self-initiating in dangerous ways (drinking too much, driving too fast, having sex too soon), he created Illuman with other concerned men, with the goal of creating a critical mass of older men who would then initiate younger men into what it means to be a man today. Within that umbrella, MALES (Men as Leaders and Elders) conduct MROP (Men’s Rites of Passage) consisting of teachings, sharing groups and powerful rituals that help knock young men off the path of remaining warriors all their lives, to the path of deeper relationships, more contemplative prayer and finally, becoming Kings or wisdom figures.

That was God’s vision for Israel, to transform them into God’s chosen people, a process of initiation, complete with rituals: the Red Sea crossing, Mt. Sinai, the Passover, First Fruits, the Day of Atonement, the Feast of Booths, etc.

Jesus also had a vision for Israel: Their infidelity to the covenant and flirting with the false gods of money, fame and power had changed rituals into mere ceremonies, and institutional religion into belonging systems that maintained the status quo instead of liminal space that truly transformed. Jesus came to reveal who God really was but ran into unbelief and ended up on the cross which he transformed into our most profound revelation of God as unconditional love, mercy, humility, forgiveness, compassion and total non-violence. 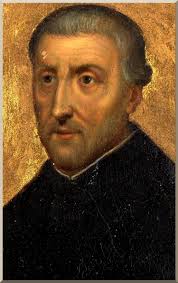 Today, the Church invites us to honor St. Peter Chrysologus. Peter, born in Italy around 406, became Archbishop of Ravenna about 439. When he arrived in his diocese, he found a strong pagan influence and many lapsed faithful. Through his labors, paganism was eradicated and the faith revived. He was a concerned pastor and preacher and earned the title Chrysologus (“of golden words”) because of his inspirational homilies, many of which are still extant. He died around 450 and was made a Doctor of the Church in 1729.