From Kenosis to Kyrios

As is the case on Good Friday, the readings provide us with such a rich content that it borders on being overwhelming, so a comment on each reading, under the umbrella of From Kenosis to Kyrios, will more than suffice.

The first gospel from Mark has Jesus coming into Jerusalem from the East, over the Mount of Olives. That is significant because in the time of Ezekiel, the temple worship had become so corrupt that the “shekinah” or glory of Yahweh rose and abandoned the temple, heading East (Ezk 10:18-19). As the temple was considered the dwelling place of God, that was a shock to the Jewish religious leaders. 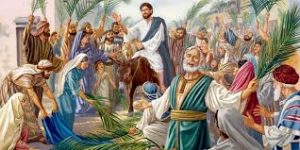 But Ezekiel prophesies that the Lord would one day return from the East, pronounce judgment on the temple, and reconstitute it in three days (Ezk 43:1-4). Zechariah 9:9 adds that the Lord, the King will come riding on a colt, the foal of a donkey. So, in this reading Jesus is fulfilling these prophecies to the letter: Jesus as the Son of David, Son of God, Messiah and new David, is coming to renew the temple and claim dominion over the city. This is Yahweh himself coming to overcome his enemies with the weapons, not of war, but of compassion, unconditional love and forgiveness. Pilate was right – Jesus was and is king of the Jews and the universe.

In the Old Testament reading, Isaiah begins his prophecy about a suffering servant and messiah that was fulfilled in Jesus’ passion, death and resurrection.

Psalm 22 is the psalm Jesus quoted on the Cross – “My God, my God, why have you abandoned me?” Here, Jesus was identifying once again with our sinful humanity through the experience of the apparent absence of God those with strong faith are sometimes given – people like St. Mother Theresa of Calcutta who for 50 years experienced only dryness and desolation in her prayer life. Just as that psalm ends with a magnificent expression of trust in God’s goodness, however, she carried out her ministry of caring for the poor and dying with such love and joy that no one guessed her spiritual dryness at all. Such was her great faith. That is the test that we who have a weaker faith pray to avoid in the “Our Father” which should read, “lead us not into the test.” This is what Jesus is referring to in the garden when he tells Peter, James and John to pray not to be put to the test.

The Philippians hymn in the second reading is a succinct summary of the whole life, passion, death and resurrection of Jesus. So secure in the Father’s love for him, Jesus could empty himself (kenosis) of his divinity and humbly accept not only our human condition in the Incarnation, but also our sinful human condition in the Jordan which would lead him to give his life for us on the Cross. That action, however, was not the end but marked a new beginning through his resurrection that made him Kyrios, fulfilling the role of the Messiah as Lord reigning over all creation forever.

In the gospel, we hear that it is near the Feast of the Passover, a sign that a new Passover is about to take place. The woman who anointed Jesus’ head with oil worth a year’s wages, a shockingly priestly gesture, intuited his destiny and used an extravagant gesture communicating there was something happening here worth more than all the money in the world. She knew he was no ordinary guest. 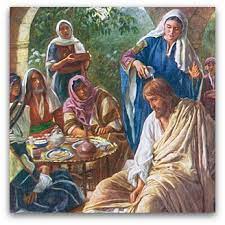 The broken alabaster jar represents the body of Jesus about to be broken on the Cross. The perfume filling the whole house, like a small bottle of Essential Oils, symbolizes the outpouring of the Spirit upon the world at Pentecost. As Jesus mentions, she was preparing him for his burial. With the blessing of the Father on him at his baptism and transfiguration, and the anointing of this unnamed woman, Jesus was so grounded in love that he was ready to face betrayal, abandonment, denial, torture and finally, death on the Cross.

The agony of Jesus in the garden is that of a lover. Gardens are where lovers go. Here, Jesus suffers not as a rabbi or high priest, but as one who has to make the decision to die well and without resentment, alone, a stone’s throw away from everyone. That, and not the physical suffering that awaited him, was his great concern. Again, the focus was on relationships, not achievements. Peter and the others promised rashly they will stand by Jesus to the end no matter what, but of course first fell asleep, and then abandoned him – the young man who ran away naked represents all those who abandoned Jesus in the end. It is ironic that those who all wanted to be close to Jesus during his ministry, even left their clothes behind to get away from him during his passion.

For the Jewish leaders, blasphemy was the greatest sin. For Jesus, it was the hypocrisy and unbelief of the Jewish leaders. They were the real blasphemers, worshipping the false gods of money, prestige and power without even knowing it, instead of worshipping Jesus who answered the high priest with the same answer God gave Moses: “Ego Eimi” – I am.

The Eucharist can be seen as a gift given twice – which makes it truly a gift from God to us. The dynamics of classical gift giving and receiving enters the picture here. When one is given an extraordinarily precious gift, the appropriate response is to politely give it back, saying one is not worthy of such a gift. The giver of the gift then has the opportunity to insist they really want the recipient to have it, thus they give it a second time. Then the recipient can truly receive the gift and feel that it is really theirs.

That is what happens in the Eucharist. God gives us God’s word, and then transforms humble gifts of bread and wine into the Body and Blood of Jesus, his beloved Son. After the Our Father, however, we give that gift back to God by saying that we are not worthy that he should come under our roof. In communion, however, God gives us back the gift of his Son a second time, and now we come forward to fully receive that gift, realizing this precious gift is ours to receive, treasure, value, appreciate and live out in our lives.

May this great mystery and gift of the unconditional love of God made present to us through the life, passion, death and resurrection of Jesus be a transformative power in our lives, leading us into a more intimate relationship with the Father through our faith in Jesus, and a more committed living out of that love for all others we meet.