FEAST OF THE CONVERSION OF ST PAUL

Pope Benedict XVI declared June 2008 to June 2009 the Year of St. Paul. In doing so he stated this special year presented us with an opportunity to learn more about the man, Paul of Tarsus, who is called the great Apostle to the gentiles, and his message.

The feast we celebrate today is an invitation for us to follow the example of St. Paul and let our encounter with the Risen Lord transform us into his witnesses to all the world. 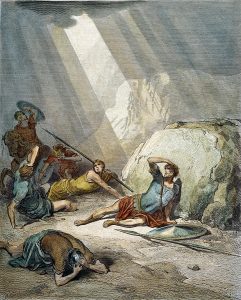 Pope Benedict chose to establish this special “Pauline Year” so we could listen to and learn from Paul, as our teacher, “the faith and the truth in which the reasons for unity among Christ’s disciples are rooted.” The description ‘teacher of the Gentiles’ opens to the future, to all peoples and all generations. For us Paul is not only a figure of the past whom we remember with veneration. He is also our teacher, an Apostle and herald of Jesus Christ for us too.” Above all, he models for us how we can also experience Jesus in our lives and go out to the whole world to proclaim this good news.

Sr. Teresita Kambeitz OSU, who followed the footsteps of St. Paul in and around Greece, speaks not so much of the “conversion” of St. Paul but of his “transformation” through his encounter with the Risen Lord. Paul was a devout Jew, born in Cilicia in present day Turkey. As he states himself in the first reading, “I was brought up in Jerusalem at the feet of Gamaliel, educated according to the strict manner of the law of our fathers, being zealous for God.” At the end of his life, he was to say of himself: “For this I was appointed a preacher and apostle… a teacher of the Gentiles in faith and truth.” The bottom line is Paul was transformed by his encounter with the Risen Lord. When I asked Sr. Teresita what was her main take-away from her journey in the footsteps of St. Paul, she replied, “Paul met and fell in love with Jesus.”

If we are to be disciples of Jesus, then we must also encounter the Risen Lord and be open to inner transformation. In the first reading today, Ananias explains to Paul what happened to him, and what needs to happen to us. “The God of our ancestors has chosen you to know his will, to see the Righteous One and to hear his own voice; for you will be his witness to all the world of what you have seen and heard.”

The key is to see Jesus and hear his voice. In short, we must also encounter him in our own lives. Pope Benedict, during the opening ceremony for the Year of St. Paul and in his subsequent audiences since then, picked up a central theme from St. Paul in that Christianity is not just a new moral code or a philosophy, but an encounter with a person.

He stresses that Paul’s experience has implications for the faithful of today. “We are Christians only if we encounter Christ,” the pope states. “Of course, he does not show himself to us in that irresistible, luminous way, as he did with Paul to make him Apostle of the Gentiles. However, we can also encounter Christ in the reading of sacred Scripture, in prayer and in the liturgical life of the Church. We can touch Christ’s heart and feel him touch ours. Only in this personal relationship with Christ, only in this encounter with the Risen One, do we really become Christians.”

Sr. Macrina Wiederkehr wrote in the Living With Christ on this feast some years back the following, “Scripture tells us that Jesus showed us in many convincing ways that he was alive after he rose from the grave. Now it is our turn to show in many convincing ways that he is alive in us. The gospel, the Good News, we are to proclaim is that our lives have been changed because of the One who lives on in us and continues to rise from the tombs of our lives. To be alive means more than taking up bodily space in this world. Am I truly alive with the life of Christ? Has my life changed because I have known Jesus in the scriptures, in the sacraments, in others, and in the depths of my own heart?”

In the gospel, Jesus repeats the psalm response for today: “Go out to all the world and proclaim the good news to the whole creation.” The good news is that he, the crucified Messiah, has risen from the dead to a new, eternal life he wants to share with those who believe in him.

He then adds signs that will accompany those who have met him, have been transformed by him, and are carrying out his mission to evangelize the whole world: casting out demons, speaking a new language, picking up deadly snakes and drinking poison and healing the sick. Before we dismiss these indicators as rather exotic and belonging to another time, let us perceive them from the experience of someone who in her own way lived out these teachings:

Violet is someone whose life was transformed by Jesus. She had been estranged from her very abusive partner for years, for her own safety. One day he severely verbally abused her over the phone. Formerly, such an incident would have thrown her into total confusion. Her recent involvement with the church, however, had helped her to meet Jesus. She had taken a Christopher Leadership course, a Cursillo weekend and had completed a year-long study of the lay formation program entitled Builders of a New Earth. In the process she had learned to “communicate with love” based on the teaching of Jesus in Mt 18:15 (“If your brother wrongs you, go to him alone and tell him how you feel.”) and Mt 5:44 (“Love your enemies.”). So instead of acting out of anger, she wrote a letter to her ex-husband describing what he had said, and expressing her feelings of hurt and anger in a positive manner, with love. Then she went with her daughter to deliver the letter to him at a meeting he was attending.

His reaction upon reading the letter was to stand there, open mouthed and speechless, then he said simply “Okay” and returned to the meeting. Her daughter said with awe in her voice, “Mom.” She had never seen her mother relate to her father in this way before – it has always been a fight. Returning home, Violet was filled with a mysterious joy. Sorting out her emotions afterwards with my help as her pastor, I helped her realize she had loved her enemy, had communicated with love, had actually forgiven him in the process and was free from fear, anger and resentment.

With excitement, I pointed out she was experiencing the signs that Jesus told the disciples would accompany them in today’s gospel. She had taken up this potentially dangerous incident and had dealt with it positively. In deciding to forgive her abuser instead of fighting, fleeing or freezing, she had cast out the demons of bitterness and resentment. In writing that letter she had picked up a deadly snake and it had not harmed her. In delivering the letter to her abuser she drank deadly poison and it did not hurt her. In communicating her feelings to her estranged husband with love, she had used a new language of love so effectively her daughter marvelled at her. Years later, as he was dying of cancer, she was the one who was there to care for him, and healing that relationship. Violet is truly a disciple who is experiencing the reign of God and the power of the resurrection in her life, and following in the footsteps of St. Paul.

Mark has insisted that the cross is the way to life for those who wish to follow Jesus. He does not compromise the paradox of suffering service by producing a glorious triumph in the end. Instead, the reader must learn that the powerlessness of Jesus on the cross has broken apart the old order of evil and initiated the rule of God. Baptism is a sign of union with and commitment to Christ, by being joined and committed to his Body, the Church. It is a commitment to living this new way of life and speaking this new language of love that Jesus taught his disciples and modelled for us.

The Eucharist makes present for us this powerful love of Christ shown to us on the Cross. When we celebrate it with faith, it has the power to transform us, forgiven and healed, into his Body, his disciples, sent out to love the world through selfless service and unconditional love.

May we follow the example of St. Paul and let our encounter with the Risen Lord transform us into his witnesses to all the world, proclaiming his resurrection by our words and our lives.