Living as Children of Light 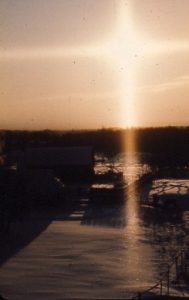 That sentence by St Paul leads right into the message of today’s liturgy – an invitation to live as children of light.

In his letter to the Ephesians, St. Paul waxes eloquently on what it takes to live as a child of the Light of the World, as a follower of Jesus. He lists kindness, tenderness, forgiveness, love, sacrifice, purity, gratitude and finally, obedience.

There is such richness in his words, so much there – how can take it all in? Perhaps the best thing to do is focus on a few key elements.

Forgiving one another as Christ has forgiven us is certainly a key element, and a very relevant one. Recently, Mary Hines made the question of forgiving sexual abusers a topic for her CBC program Tapestry. A female Jewish rabbi who has written on that topic in the light of the Me-Too movement ended up stating that in her tradition, victims were not obligated to forgive their abusers – that was the prerogative of God. Another speaker, also a victim, related how she refused to forgive a former boyfriend who had hurt her deeply by kicking her out of a car and driving away to be with another woman, even when he contacted her to apologize. By the end of the program I was convinced the problem was an inadequate understanding of both the art of forgiving, and the art of an apology.

Part of the difficulty these speakers had in forgiving was the ego-driven attempt of the abusers to regain some of the status, power and adulation they had before they were deposed, coupled with a sense of entitlement and a lack of truly owning the harm they had done. It so happens that my book Still Green and Growing, published in the spring of 2019, includes a chapter on forgiveness (Being Mellow in a Bitter World) and one on apologizing (The Art of an Apology).

That being said, I was even more grateful for the teachings of Jesus on forgiveness that lets go of all expectation, and is able to forgive out of obedience to him, regardless of the response by the abuser. And that brings up the last quality mentioned by St. Paul and alluded to in the psalm – obedience in the form of delighting in the law of the Lord and pondering it ceaselessly. How we can obey God becomes clear as we study the scriptures, the written word of God.

The Word of God clearly teaches that forgiveness is at the core of our faith – modelled by Jesus who was forgiving those who were crucifying him. It is forgiveness, and forgiveness alone, that breaks the cycle of violence in our world.  And when we act like God, we get to feel like God – peace, joy and self-esteem floods back into our lives, because we are just like Jesus on the cross, and it doesn’t get any better than that.

The gospel points out another way we can live as children of light, and that is by making the law of love a priority in our lives. Of course, the bent woman in the gospel should have been set free! God’s love overflows, heals, liberates, and sets free beyond the constraints of the Sabbath law and the hypocrisy of the Jewish religious leaders. Having suffered with a disability for eighteen years, she has every right to approach Jesus. Still, her healing draws a firestorm of criticism because Jesus breaks the Sabbath Law in healing her.

Though you would expect the synagogue leader to join his congregation in rejoicing in the miracle he has just witnessed, he rebukes the woman by quoting the Law of Moses to her. The synagogue official tries to re-assert his control and resists the flow of divine energy that is happening, and in which the people rejoice. In response, Jesus asks the leader an obvious rhetorical question: “Ought she not to have been set free, when even animals are watered on the sabbath?” (Lk 13:16)

This one simple question shines light on a profound issue. Perhaps, within legal technicalities, this woman shouldn’t have been cured on the Sabbath. But Jesus cares more about people than legal technicalities – and we should too. As we face crippling conditions around us, we too should ask, “Ought not everyone have access to adequate food, housing, and clean water? Ought not the unborn be loved and protected? Ought not everyone receive medical care and enjoy friendship? Ought not all the elderly receive the best palliative care as they approach death?” Of course, they ought to!

With just one question, Jesus unmasked what Pope Francis has called the “culture of indifference.” He also named the remedy: build a “culture of encounter.” Jesus didn’t just heal the woman; he called her a “daughter of Abraham” (Lk 13:16). He placed her on the same level as everyone else and treated her with great dignity.

“Daughter of Abraham” – three simple words. Sometimes that’s all it takes. Even the slightest gesture of solidarity “builds bonds, cultivates relationships, creates new networks of interaction and knits a firm social fabric” (The Joy of Love, p. 100). It doesn’t require a lot of effort to begin dismantling indifference and to start building bridges instead.

It can start with something as small as a kind look. It can be the decision to slow down and listen attentively to someone or the choice to offer a bottle of water to someone on the side of the road. That’s where it starts. But it can go on from there. Once we start breaking down indifference, we can try to double our efforts over time. As we do, we’ll see a double portion of God’s blessing being poured out. Ought not everyone in need have their needs met? Yes! And that will happen when we make caring for those in need our top priority, over and above liturgical rulings and rubrics, even attending Sunday Eucharist.

My late brother and sister-in-law were on the way to church one Sunday morning as a family, when they came across a family in a car broken down on the highway. They became Good Samaritans, stopped to help the family get going again, and in the end missed mass that Sunday. Did they break the law? Yes, in one sense, but in another sense, they fulfilled a higher law – to love one’s neighbor as one’s self. That law is so important St. Paul can even categorically state, “For the whole law is summed up in a single commandment, ‘You shall love your neighbor as yourself’” (Galatians 5:14).

The Eucharist is an experience of that unconditional love of God for us through Word and Sacrament that empowers us to live the teachings of St. Paul and especially those of Jesus, so we can truly be light in the Lord and live as children of light, sharing the love of Jesus with everyone we meet, especially those most in need of it.