On Being True to Moses – Mission Sunday

Today, the Catholic world celebrates Mission Sunday, which given the recent focus on colonization here in Canada and in other parts of the world, can give us reason to pause for reflection, as it does for me very personally.

In 2014, I was invited by the Oblates in Kenya to ordain a young seminarian and offer a Christopher Leadership course. As the motto of the leadership course had to do with light, I sent out an appeal inviting family, friends and acquaintances to help “light a candle in the heart of Africa.”

One response to the appeal was surprising, cryptic and critical. Why was I, a Caucasian North-American, going to Africa to “do things for” the Church there, to give a Western leadership course to the people there, to “light a candle there” as if there was not any light there already? Why not go as a learner, to observe and learn from the elders and the people there, from their culture and spirituality, and come back to share with the people here in North America what I had learned? 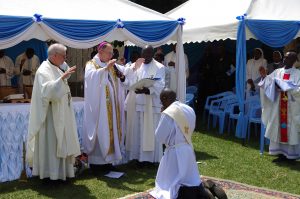 Taken aback, I reconsidered and realized this person was right, at least from a cross-cultural perspective. There was a bit of hubris in what I was planning to do, so I decided to let go of giving the course, and instead spend as much time as I could simply observing, participating and learning, as well as presiding at a very culturally dynamic ordination. And in the end, that made the trip much more manageable and rewarding.

That role of cryptic and critical prophet seems to be the role Jesus played in so much of his inter-actions with the religious leaders of his time. As a Mosaic prophet, he was less tied to the way the Temple worship was carried out than the Temple prophets had been, and freer to critique the abuses that he saw.

Those abuses were basically a co-opting of the Jewish religion by the Romans. Within an oppressive political system, the religious leaders, in this case, the Pharisees and the Herodians, had developed a way of living and worshipping that basically was based on their own greed, false pride and lust for power. What was most blatant for Jesus was how they had strayed away from the teachings of Moses to care for the widow, the orphan and the alien.

The grip this abusive system had on the Pharisees and Herodians was so great they were ready to kill to hang on to it. In today’s gospel, they are plotting to catch Jesus in a fault that would give them just that excuse – kill him. To their chagrin, Jesus turns the tables on them by asking them to produce a coin. To carry that Roman coin with the image of Caesar on it was actually akin to blasphemy for the orthodox Jews, but in their greed they had so long excused themselves from that reality that they were used to it, and readily produced the coin. That led to Jesus’ cryptic comment that subtly revealed their hypocrisy – “Give to Caesar what is Caesar’s, and to God what is God’s.”

The other readings provide a harmonious support to the position of Jesus. Isaiah speaks about Cyrus, a pagan king who although he did not know God, was called by name, anointed by God and sent to the house of Israel to precisely wake them up to their sin, their infidelity to the teachings of Moses, and to call them to repent.

St. Paul, in the second reading, cannot sing the praises of his beloved Thessalonians enough, whose faith in action, loving deeds and perseverance in hope through Jesus Christ, is the complete opposite of the religious leaders Jesus struggled with in this gospel and indeed throughout his ministry.

The message is clear: we must be vigilant that our faith and worship never strays away from the teachings of Jesus. We are to always love God with all our being; love others as we love ourselves; to even love our enemies, and to live the Beatitudes. Then we will be pleasing to him as the Thessalonians were to St. Paul.

May our celebration of the Eucharist today empower us to deepen our faith; strengthen our hope, and live out our faith in acts of love. May we prove to be Thessalonians, and not Pharisees or Herodians on our own journey of faith, a faith that finally is very culturally sensitive and respectful.