Following Jesus into the Kingdom

The kingdom of God, discipleship, priorities, sacrifice, witness, redemptive suffering and prayer are a sequence of themes making up the readings today.

The kingdom of God is the underlying reality of the gospel, revealing again the main focus and interest of Jesus in all his teaching, preaching and ministry. That is understandable as his mission was to inaugurate the kingdom of God among us, here on earth, here and now, a sharing in the very divine life he enjoys with the Father. The most obvious statement about that “realized eschatology” in theological terms forms my motto as a bishop – Regnum Dei Intro Vos – the kingdom of heaven is among you, taken from Luke 17:21.

Within that focus, Jesus immediately set about forming a fledgling community, calling humble, ordinary folks to follow him into the kingdom as disciples. A disciple – Mathanete – means a learner, one who listens, imitates, and strives to become a carbon copy of the master. In the gospel today, some offer to become disciples, others are called. Both initiatives receive enigmatic statements from Jesus suggesting discipleship is both very special and demands total commitment.

To the one who expresses a need to bury his father, the response of Jesus clearly makes proclaiming the kingdom a higher priority than even that sacred and social obligation. Believers have taken this seriously over the history of the church, missing the death and burial of loved ones for the sake of missionary activity. Fr. Bill Stang OMI, for one, missed the death of both his mother and a sister when he was in Kenya helping found the Oblate mission in Meru.

To the other who offers to become a follower, Jesus stresses the sacrificial aspect of living in the kingdom as a disciple. Even he, the Son of God, had to sacrifice the comforts of a more settled existence as he went about Galilee spreading the good news of the kingdom. One might even have to forgo a farewell party when one has been sent out on mission – so urgent is the call to make the kingdom present in people’s lives!

The book of Job adds an Old Testament dimension to this kingdom – that of redemptive suffering. Job prefigures Jesus in the way he was able to accept suffering that seemed meaningless and pointless in his life without bitterness or resentment, and that is the key to the mystery of the kingdom of God – the brokenness of Jesus on the cross – forgiving those who were crucifying him.

When we are able to accept suffering in our lives without bitterness or resentment, we are in the kingdom and just like Jesus on the cross. And when we act like God, we get to feel like God – peace and joy, knowing we, like Jesus, are doing the Father’s will, and our suffering, connected with his, takes on deep meaning and purpose. It actually becomes redemptive suffering, just like his, helping build up the kingdom of God here on earth in a mysterious way.

The psalm adds a last element to following Jesus as his disciple, and that is calling out to God in prayer. The prayer Psalm 88 seems to suggest is the prayer of the Anawim, the poor people who know they need God, who have no pretensions or illusions, who trust completely in God’s providence, and who ask God especially in the morning for the spiritual gifts they need just for that day, and receive those gifts in faith.

St. Francis of Assisi possessed that kind of humble faith, trusting in God’s providence, depending on alms for their sustenance, and experienced in his life the joy of imitating Jesus in that way and humbly walking with God as he renewed the life of the church of his time. 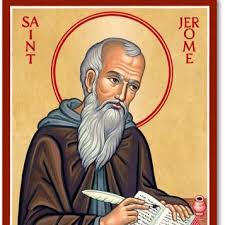 Today the Church invites us to honour and emulate a great example of someone else who truly lived these teachings. St. Jerome was born in Dalmatia about 342 and baptized in Rome by Pope Liberius. Having experienced a vision of Christ, Jerome withdrew into the Syrian desert for four years, praying, fasting and learning Hebrew. He was ordained in 377. Jerome’s mastery of language enabled him to translate Hebrew and Greek books of the Bible into Latin, the language of the common people; this translation is called the Vulgate. In the 16th century, the Council of Trent declared Jerome’s Vulgate an official text of the Catholic Church.

Jerome’s rhetorical skill coupled with his fiery temperament made him a fierce opponent in theological debate and involved him in controversy most of his life. His last years were spent in Bethlehem, where a group of noble Roman women under his spiritual direction used their wealth to build convents, monasteries and hospices. These consecrated women, led by St Paula, are regarded in Church history as a powerful witness to early Christian feminine spirituality. Jerome died on this day in 420. His accomplishments in biblical studies are without parallel in Christian history. He is a Doctor of the Church, and patron of scripture scholars, translators, archeologists, librarians and students.

The Eucharist brings all these themes together as we gather to profess our need for forgiveness and healing, to be nourished by God’s own word, and to receive the Body and Blood of Jesus visible only as humble gifts of bread and wine.

May our celebration empower us to live out these themes, follow Jesus as his disciples, and help build up the reign of God here on earth.