Our Healing Journey of Faith:

“Whoever acknowledges me, I will acknowledge before my Father in heaven.”

That statement is a clear call to believe in Jesus. The readings add the dimension of forgiveness and healing to that call. Acknowledging Jesus, believing in Jesus entails a healing journey of faith.

In the first reading, Isaiah has a powerful vision of God in heaven that includes forgiveness and healing. An angel touches his mouth with a life coal taken from the altar of God that blots out his sin and takes away his guilt. That experience gives him the courage to accept the mission God has planned for him.

In the gospel, Jesus invites us to be his disciples by following him, not trying to be greater than him. That is a call to accept some suffering in our lives, as he accepted to suffer and die for us. We are to follow him through his Paschal Mystery to new life.

Jesus then adds the dimension of forgiveness and healing to that call, much like the experience of Isaiah. What is in the dark must be brought to the light; what is secret will be proclaimed from the housetops. This is an invitation to us as disciples into a journey of experiencing God’s love as forgiveness and healing. The comment Jesus makes about the value of our souls suggests this is soul work.

Often, those who come for spiritual direction become aware of some unfinished business in their lives. They slowly realize they are still carrying some anger and resentment towards those who have hurt them in some way, and find they have to learn to forgive these people from the heart. That can be a deep and profound healing.

They often also come to the realization they are also carrying some guilt and fear around all the people they may have hurt, and find they also have to apologize to those people. In the end, they might ask to celebrate reconciliation, to receive God’s forgiveness for their hurtful actions, but also to receive healing for the painful emotions and negative attitudes that led them to act out in hurtful ways. After a retreat, they often leave with a renewed spirit, empowered to say like, Isaiah, “Here I am, Lord, send me.” 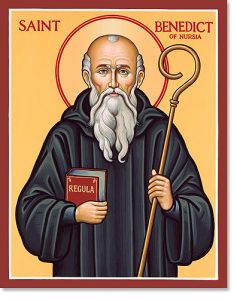 Today the Church honors St. Benedict. Considered the father of Western monasticism, he was born in Nursia in central Italy circa 480 and died in 547. The little we know of his personal life comes from two documents: The Second Dialogue of Gregory the Great, and the Rule written by Benedict himself. Benedict was educated in Rome, a decadent city. After a few years, convinced God was calling him to be a monk or hermit, Benedict fled to a local village. After a brief stay with some holy men, he decided on a life of solitude. He received the monastic habit at Subiaco, and retired to a cave, where he lived alone in the tradition of the Desert Fathers. Soon, he began to attract followers and built 12 small monasteries.

Between 520 and 530, Benedict and a few companions founded the great monastery of Monte Casino, where he spent the rest of his life and wrote his Rule. This work became the primary influence on Western religious life for the next 600 years and is still followed by the “daughters and sons” of St. Benedict. This remarkable guide reflected the fatherly concern and charity of Benedict as he adapted the austere rule of the Desert Fathers to community life. He emphasized moderation, humility, obedience, prayer and manual labour as the way of holiness. St. Benedict is considered the Patriarch of Western monasticism, and was proclaimed patron of Europe in 1964 by Pope Paul VI.

The Eucharist is an act of faith in Jesus as Son of God and Bread of Life. Just by our participation, we experience forgiveness and healing. May our celebration empower us to respond with the zeal of Benedict and the generosity of Isaiah.