A man took his dog out hunting ducks. Every time he shot a duck on a lake, the dog walked on the water to get it. Amazed, the man took a boastful friend along the next time, and the same thing happened, though his friend never commented. Finally, he asked him if he noticed anything about the dog, to which the friend replied after some thought, that he had noticed something – the dog couldn’t swim!

Humble faith, not power, is the key to the Kingdom.

The readings today trace a path of humanity’s progress towards a deeper understanding of the true nature of God. They contain an invitation to us to believe in who God is and to humbly experience that truth in our lives by living in the Spirit of Jesus.

The first reading from Zechariah is a fascinating and rather strange prophecy about a royal personage who though triumphant and victorious, is also humble and will come into his kingdom riding on a donkey. Already, in the time of Zechariah, God was preparing the chosen people to recognize Jesus as their true king – the humble saviour who would come into Jerusalem on Palm Sunday on the back of a donkey.

The psalm takes us up on the mountain to that time that Moses wanted to see God’s face. God responded that Moses could not see God’s face and live. God would, however, walk before him and he would catch a glimpse of God from behind. Hindsight is to this day one of the ways that we can see how God has been working in our lives. And as God walked before Moses that day, he revealed to Moses, more than to any other human being, the true nature of God through the very words of this psalm: The Lord is gracious and merciful; slow to anger and abounding in steadfast love; good to all and his compassion is over all that he has made.

Moses, after he had reacted violently to the infidelity of the people by breaking the Ten Commandments that he had been given, fusing them down to powder and forcing the people to drink the potion, was learning a key lesson as the Lawgiver to the chosen people – that this all-powerful God was also humble and non-violent. That is a lesson that humanity still has not learned. How often today do especially fundamentalist extremists commit acts of violence in the name of religion?

The gospel presents us with the words of that King about whom Zechariah prophesied. Jesus, so humble and ordinary that most rejected him, thanks the Father for the marvellous hidden way God is at work not in the rich and powerful, but in the little ones. He underlines the truth that it is only the Son of God, who is with the Father, who truly knows the Father, who can reveal the Father to those who also are humble and lowly, who are willing to admit they need help and are able to reach out for that help in prayer. 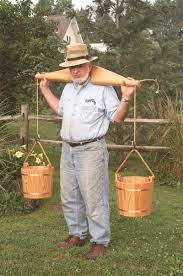 Jesus encourages us to take up his yoke, which will render out burden light. A yoke was carved to fit the necks of the oxen who would be using it. Likewise, our burdens and suffering are what helps us develop deeper faith and character. One summer I spent a few days at the mission in Cree Lake, a log cabin and church perched high up on a sandy point. My first attempt to haul water up the steep incline ended up with me spilling half of it. That evening, we discovered a hand-carved neck yoke behind the door. The next morning, I was amazed that using the yoke, I literally jogged up the hill without spilling a drop. What a difference that yoke made. And what a difference it makes in our lives when we are yoked with the Spirit of Jesus who gives us the strength we need to deal with the challenges and obstacles in our lives.

Don Piper is a minister who produced a CD series entitled “90 Minutes In Heaven.” It is the story of an accident that changed his life. Because he was so badly mangled and showed no signs of life, attendants at the scene of the accident were convinced he was dead. Before a coroner could arrive to pronounce him dead, however, another minister prayed for him and he revived, so the ambulance took him to a hospital instead of the morgue to begin a long and very painful period of recovery.

Reflecting on his near-death experience (NDE) experience, he realizes now that he learned to be humble, as he never would have otherwise. He learned to open up and share his feelings with others, something he struggled to do before. And as a patient, he learned to allow others to do things for him, he who was so used to doing things for others. And finally, he learned to obey the suggestions of others to share his experience of being in heaven for 90 minutes, before coming back to consciousness. His NDE story has touched the lives of many. The reaction of his hearers to his story has helped him to understand the purpose for his suffering and his painful recovery.

The Eucharist is a very humble meal provided by the Father through the sacrificial death of His Son and by the power of the Holy Spirit. Humble gifts of bread and wine are transformed into the Body and Blood of Jesus. As we share in this communion, we are transformed into his people, his Body, sent out to build up the Kingdom of God among the humble. We are to invite the powerful to let go of their pride and to share in this new way of life that is nothing short of eternal life begun in us now.

So, let us place our faith in Jesus, receive his Holy Spirit, and walk humbly with our God.