Befriending our Shadow and Not Judging:

The readings today offer us two related messages: Do not judge and the importance of self-awareness.

The first, do not judge, is one passage from scripture we would do well to take literally, like “love one another” or “forgive one another.” When we refuse to forgive, we cannot receive forgiveness. When we judge others, we will be judged.

I learned a lesson on not judging as a young priest in my first mission. I felt angry as a home where I dropped in to visit in the early afternoon was the scene of a drinking party. Intending to support the wife in the kitchen who was sober, I noticed a woman I did not know in a far corner. I was told she was from Montreal Lake and was staying with someone in the village. Reasoning we had enough problems already without adding one more, I was angry at her for even being there. On the way out, however, I had to go right by her. Still resentful, I made myself stop to greet her. She shared part of her story, including an abusive relationship and being locked in the trunk of a car. As I left to go jogging, she said she wanted to talk some more, but wanted to sober up first, and would then come that evening to the rectory for a visit.

As I jogged back into the village, I heard an explosion, ran faster and came to a house on fire. Apparently, the furnace had exploded. When I asked if anyone was inside, I was told the family had escaped, but a girl from Montreal Lake was sleeping downstairs and never made it out. I was shocked and felt partly guilty – after we parted she apparently left the party to sober up and died in that fire. At the same time, I was grateful for the brief conversation we did have, a glimmer of faith and hope it may have given her, and the lesson it taught me – not to judge another person without walking a mile in their moccasins.

The second message is related to the first: not judging is being able to see the log in our own eye, rather than the splinter in the eye of the other. That involves self-awareness, which is really the key to personal growth and healing.

Noted speaker Franciscan Richard Rohr began a retreat to the Oblates in Saskatoon with the sentence, “You are who you are who you are – what are you afraid of?” That statement shocked me, as at that stage in my life I really did not know myself and feared that if others really got to know me, they might not like me. My sister-in-law told me once that I was afraid to love and be loved, and deep down I knew that to be true.

An obstacle to truly knowing ourselves is fear and denial in all its forms. The log in the eyes of the Israelites in the first reading is idolatry and stubborn self-will. They were always resisting the will of God in their lives, and wanting to do everything their own way, which always got them into trouble. The log in the eye of the Pharisees and scribes in the New Testament is unbelief, and hypocrisy. Those two sins are what bothered Jesus the most about them, sins they consistently refused to see in themselves.

The real insidious feature of denial and blame is we project onto others and see in them, what we fear and refuse to see, face and deal within ourselves. Chances are what bothers us in someone else, is precisely what we have refused to see in ourselves. We can make others, most often our loved ones, husbands, wives, children, siblings – the scapegoat for our running away from ourselves and our own truth.

The late John Monbourguette OMI, psychologist, author and priest, wrote a book entitled How to Befriend Our Shadow. The wonderful reality of our shadow is it is not something we need to fear or suppress – it is just part of our human reality, our false self, that begs to be recognized, acknowledged, respected, named, shared and ultimately, healed. But we can’t heal what we can’t feel or acknowledge. I am sure Jesus was referring precisely to this need to befriend our shadow when he encouraged us over and over again to “not be afraid.” Our shadow will be painful emotions, negative attitudes and defects of character, and even our hidden addictions – all in need of healing. 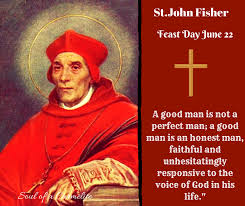 Today the church invites us to honor St. John Fisher. Born in Yorkshire in 1469, John was ordained to the priesthood when he was just 22. An eminent theologian, John sought to improve the university’s academic standards and advised the hiring of Erasmus to lecture in Greek. John, Erasmus and Sir Thomas More became great friends. In 1504, John was made bishop of Rochester. When Henry VIII began seeking to annul his marriage to Catherine of Aragon, John defended the queen’s position, refusing to sign that part of the Act of Succession of 1534 which had the effect of overriding papal authority. King Henry counted this as treason. Old and sick, John Fisher was imprisoned in the Tower of London. Several months later, the pope made him a cardinal. This so angered the king that, rather than wait for him to die, Henry had John beheaded. Four hundred years later, along with his friend Sir Thomas More, John was declared a saint.

In the Eucharist, God accepts us as we are, forgives us, heals us, and empowers us to go out and spread that Good News of God’s love.

So, remember, there are two clear messages from the readings today: to not judge others, and to make that inner journey into greater self-awareness and knowing ourselves, to befriend our shadow.