Knowing God and the Holy Spirit:

“When the Advocate comes, whom I will send to you from the Father…”

That one sentence from Jesus suggests our complete faith in God as Trinitarian relationship is the key to joyful sharing of our faith without counting the cost.

There is much to ponder in the today’s gospel from the last discourse of Jesus. Jesus knows that his hour has come, that he would suffer horribly the next day and die an agonizing death by crucifixion, yet he calmly promises his disciples a gift of the Holy Spirit. That Spirit of truth who comes from the Father as Advocate, will verify that Jesus is truly the Messiah, the Son of God, Lord and savior of the world.

Jesus teaches his disciples this truth, empowering them to endure the sufferings that will come their way just because they are his disciples, believe in who he is, and will also be called upon to testify and proclaim that truth to a hostile and unbelieving world.

Jesus explains they will even be killed by those who think they are worshipping God because they have not known the Father or him. This is a striking statement – good, religious, pious people who “believe in God,” really do not know God at all, and are thus willing to do violence in God’s name, thinking they are doing the will of God. How can this be?

A hint comes from the first reading. Paul with Luke and other disciples, filled with that Spirit promised by Jesus and poured out upon them at Pentecost, are on a missionary journey to the far corners of the known world to announce to all they encounter the good news of Jesus risen from the dead, known as the kerygma when it is proclaimed for the first time. In Philippi, they find themselves preaching to a group of women by the river.

Lydia, a woman and dealer in cloth from Thyatira who already believed in God, listened to them, was convinced by their message, accepted that Jesus was the Messiah, Son of God and Risen Lord, and was baptized, received into the early Church, the Body of Christ, along with her whole family. She made the radical shift from belief in one God, the theism of Judaism and perhaps her own traditional religion, to faith in God as Trinity, as dynamic inter-relationship of love – Father, Son and Holy Spirit.

She stands in contrast to those whose narrow world view and attachment to the benefits that their religiosity brought them (identity, accommodation with the Roman occupational force, a certain security and for some, limited authority, status and wealth) as long as they did not question the status quo or resist the unjust political system that was in place.

As Karl Rahner put it, they did know what they were doing when they crucified Jesus – they were killing an innocent man. Pilate knew this, the religious leaders (chief priests, scribes and Pharisees) all knew this. What they did not know, Rahner asserts, is how much they were loved! They did not really believe the truth – that God is love – so blinded by their jealousy, ignorance and fear of losing their privileged status, they were willing to do violence in God’s name, and think they were “worshipping God” in so doing.

What they did not know was the God of Jesus Christ, revealed by his death on the cross, and by the way he died – forgiving his executioners. The gospels make a point of mentioning the curtain veil in the temple was torn from top to bottom the moment Jesus cried out, “It is finished” on the cross and breathed his last. That curtain was there to keep people out of the Holy of Holies, where God was believed to dwell, and into which only the high priest could go once a year after he had purified himself.

Jesus, by his death on the cross, revealed the “truth” to us – now there is no separation between God and humanity, and we can see right into the heart of God. And what we see is mercy, humility, honesty, compassion, unconditional love, forgiveness and total non-violence. Finally, for the first time ever, once and for all, we know the truth – who our God really is – the God revealed by Jesus, the suffering servant of God, who went to his death with no resistance, like a lamb led to the slaughter – the Lamb of God who alone can take away the sin of the world.

This God is not to the liking of those overly attached to the false gods of possessions and pleasure, prestige and fame, power and control. They just could not give these up, let them go, change their ways, believe in Jesus and follow him, so they had to get rid of him, and justify their actions with religious laws that undermined the one supreme law of love that Jesus taught.

What is truly sad is in their lust for money, fame and power, they rejected their opportunity to experience what Psalm 149 promises to those who would believe in Jesus and proclaim him to the world – exuberant joy, grateful praise and knowing that God takes delight in them. This presence of the Spirit of Jesus in their lives empowers believers to bear witness to Jesus in the face of all obstacles, persecution and even at the cost of their lives as martyrs for the truth. That unbroken line of martyrs, believers willing to give their all to testify to this earth-shattering truth, continues to this day when there may be more martyrs killed for their faith then at any other time of history.

Fr. Gerry LeStrat OMI, a missionary in Guatemala for many years, tells of Bishop Juan Gerardi who investigated the atrocities and massacres of entire villages by the military. They were trained by the School of the Americas and ordered by the government to carry out the selfish goals of the multi-national fruit companies based in the United States who were usurping land from the poor. When Bishop Gerardi broadcast his findings that 92 percent of the killings were by the military, 4 percent by the guerillas, and the rest unknown, the army killed him and tried to blame his death on his dog. When that was proven impossible, they slandered a priest living in his house, claiming he was a homosexual and had killed the bishop to cover that fact. This priest is still unjustly incarcerated in Guatemala, afraid to defend himself because of what the army would have done to his mother who was still alive. Bishop Gerardi is a modern martyr who gave his live for the faith and for the poor, while the priest is suffering unjustly. 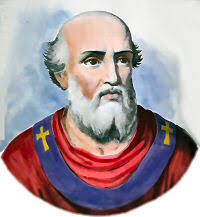 Today the church invites us to honor another little-known martyr, St. Pope John 1. When John I became pope in 523, Italy was ruled by an Arian, Theodoric the Goth, who had reversed his policy of tolerance towards Christians because of trouble between Rome and the emperor of Constantinople, Justin I. When his subjects appealed to him, Theodoric organized a delegation to negotiate with the emperor and ordered a reluctant Pope John to head the mission. Enthusiastically received, John did win some concessions, but Theodoric was not satisfied. In 526, when the delegation returned to Ravenna, the pope and his entourage were imprisoned. John died soon after, probably of starvation.

The Eucharist makes present the truth proclaimed by Jesus that our God is a Trinitarian God of love, a truth believed by Lydia, Bishop Juan and countless martyrs over the ages. May our celebration strengthen our faith in our Trinitarian God and empower us to joyfully witness to this truth in our lives regardless of the cost.