There is a saying, “People get the government they deserve.” That saying applies to the readings and memorial liturgy today.

We are invited to place our faith in Jesus, the true king of Israel, listen to his voice, come to him for forgiveness and healing, and glorify him with our lives.

In the first reading, the people of Israel reject God as their ruler, want to be like the other nations, and pressure Samuel into naming a king for them. God relents to their stubborn demands, but not without warning them they should not expect God to rescue them from the consequences of their poor decision. And we know that for the most part, the role of the kings throughout the history of Israel, including Saul, was fraught with conflict and suffering. The one exception was King David, whose experience of God’s unconditional love as forgiveness, transformed him into the one good king Israel ever had, pre-figuring Jesus, the true king of Israel and of the world, born of the line of David and referred to as Son of David.

In the gospel, we see that true king of Israel in action, and we learn much about how to be a follower of this king. First of all, Jesus is “speaking the word” to the people. Jesus is the word made flesh. His word is what gives us life. He continues to “speak the word” to us through the scriptures. It is imperative that we read his word, study his word, pray with his word, listen to his word, integrate his word, and live his word. Bible study and Lectio Divina should be part and parcel of our lives as the followers of Jesus. After all, the bible is our book, the book of the church.

Then Jesus notices the faith of the four men who believe in him so deeply, that they go to the extraordinary effort to lower a paralytic through the roof right in front of him. I once saw a painting of this incident that dramatically illustrated their faith – dust settling over the whole scene, sunshine streaming in through the gaping hole in the roof right onto Jesus and the paralytic, the four men looking down on their friend and on Jesus – imagine that kind of faith! That is the faith with which we need to approach Jesus. It is also a magnificent example of the power of intercessory prayer – not only praying for the well-being of others, but also then doing our utmost to be the answer to our own prayer!

It is significant that when confronted with a man who is obviously physically paralyzed, Jesus first tells him his sins are forgiven. That tells us much about our God who is forgiveness and compassionate love, and who first and foremost wants to forgive us our sins, and heal us of our painful emotions, negative attitudes and addictions that made us sin in the first place. Then, aware of the judgmental thoughts of the scribes, Jesus also heals the man of his physical paralysis, demonstrating the holistic nature of God’s love for us that wants us to be well in all the dimensions of our lives. This healing also reveals the reason Jesus (who was not a miracle worker) did miracles – always to show who he was, the Son of God, and to elicit belief in him.

The healed man takes up his stretcher in obedience to Jesus and walks out in front of all the people gathered there. Their response is also significant – they glorify and praise God for what they have seen, and so must we, with our lives. Out of gratitude for the love of God lavished on us, especially for freeing us from our paralysis of guilt and fear, anger and resentment, shock and shame, sadness and self-pity – we are to give praise and glory to our God, even if we may not experience a physical healing that we may desire.

Today the church honors St Anthony who had a profound influence on the history of monasticism. Anthony was born into a wealthy Christian family in Upper Egypt about 251. Both his parents died while he was a teenager, leaving him with only a younger sister whom he cared for and also looked after their home. 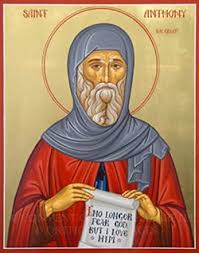 Not six months after the death of his parents, as he was on his way to church, he began to think of how the apostles left everything and followed the Savior, and of those who in the book of Acts who had sold their possessions and distributed the money to the needy. He reflected too on the great hope stored up in heaven for such as these. Entering the church for his usual visit just as the Gospel was being read, he heard the Lord’s words to the rich young man: “If you want to be perfect, go and sell all you have and give the money to the poor–you will have riches in heaven. Then come and follow me.” It seemed to Anthony that it was God who had brought the saints to his mind and that the words of the Gospel had been spoken directly to him. He immediately left the church and gave away to the villagers the 200 acres of very beautiful and fertile land he had inherited, so that it would cause no distraction to him and his sister. Keeping a portion to care for her, he sold all his other possessions and gave the money to the poor.

The next time he went to church he heard the Lord say in the Gospel, “Do not be anxious about tomorrow.” Without a moment’s hesitation, gave the poor all that he had left, after placing his sister in the care of some trustworthy persons and arranging for her to be brought up in a convent. Then he gave himself up the ascetic life, not far from his own home. He kept careful watch over himself and practiced great austerity. He did manual work because he had heard the words: “If anyone will not work, do not let him eat.” He spent some of his earning on bread and the rest he gave to the poor. Having learned that we should always be praying, even when we are by ourselves, he prayed without ceasing. Indeed, he was so attentive when Scripture was read that nothing escaped him and because he retained all he heard, his memory served him in place of books.

Seeing the kind of life he lived, the villagers and all the good people he knew called him a friend of God, and loved him as both son and brother. This was the beginning of Christian monastic life soon taking root elsewhere. In 311, Anthony went Alexandria to encourage the Christians who were being persecuted. In 355, he returned to Alexandria to help his close friend Bishop Antanasius in the struggle against Arianism. Anthony died on January 17, 356, well known for his holiness, wisdom and asceticism.

The Eucharist, which St Anthony attended every day, is at its core, an act of thanksgiving and gratitude. The word eucharistes means precisely that – to give thanks. It is also our greatest prayer of praise that gives glory to God.

May we celebrate it with faith, thanking God for the forgiveness and healing that Jesus brings us through Word and Sacrament, and, like the people in the synagogue and St. Anthony, give praise and glory to our God.