BAPTISM OF THE LORD – A

Called to a Heart-felt Faith

When Jesus anonymously joined the disciples on the road to Emmaus after his resurrection, he proceeded to explain to them all the prophecies in the scriptures that were about him. The first reading today from Isaiah chapter 42 must certainly have been one of those passages. How could anyone miss the import of those beautiful words in that reading as not possibly referring to Jesus, the Son of God, risen from the dead?

Certainly, he was the servant God upheld, the chosen one in whom God delighted, the one endowed with God’s spirit. It is he who would finally bring justice to the nations, yet be gentle, acting with the power of love and forgiveness, the power of powerlessness.

It was he God called and appointed to serve the cause of justice and right as covenant to the nations. Most striking of all, he would bring healing: open the eyes of the blind; free captives from prison and free those who live in darkness. Certainly, all these attributes in that prophecy from Isaiah spoke loudly and clearly about Jesus as the subject of those prophecies.

In the end, the life, death and resurrection of Jesus not only fulfills all prophecies, but also calls us to follow him with lives that balance faith and charity.

Turning to the Gospel, we find this centuries-old tradition of prophecies comes to an abrupt end. Jesus just appears, we are told, almost out of nowhere, and this would be the end of his private life, and of the age of prophecy. Heralded by John the Baptist, who because he was the last forerunner to the coming of the messiah is considered the greatest of the prophets, Jesus humbly accepts baptism from the hands of John.

How fitting that the first act or gesture of the public life of Jesus was an act of great humility, so fitting to all the prophecies that prepared the way for his coming. In the Jordan, Jesus who took on our humanity at the Incarnation, took on our sinful humanity at his baptism.

Another striking note is that when Jesus was baptized in the Jordan, the heavens opened up like the veil of the Temple when Jesus died on the Cross. There is a link between these two events, one foreshadowing the other. 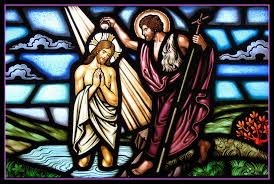 As the heavens split open at the baptism of Jesus, so too the death of Jesus would tear open the veil of the Temple that separated the people from the Holy of Holies. His death on the Cross would open the way for the poor, the lowly, the oppressed, the marginalized, especially those not considered worthy enough, or pure enough to enter the Temple, to enter not only the Temple, but also the reign of God here and now.

The Spirit of God descended on Jesus like a dove, and the Father’s voice came down from the heavens: “This is my Beloved Son on whom my favor rests.” As prophesized, God’s Spirit, God’s grace and power is now with Jesus. This is the beginning of a Trinitarian spirituality and theology. The term “righteousness demands” hints at the Kingdom of God, peace, joy and especially the “justice” or right relationships in the Spirit.

Noted speaker and spiritual writer Richard Rohr, OFM, wrote an article once entitled Christmas is Already Easter. It is this connection of the wood of the manger with the wood of the Cross; the swaddling clothes wrapping Jesus at Bethlehem with the linen cloth wrapping his body at Calvary, revealing the hidden plan of God that was hinted at through all the prophecies given to the Chosen people, which they ultimately missed, did not understand, or ignored.

According to our Israeli guide, to this day, the Israelite people are operating out of a mistaken perspective of scripture. Instead of focusing on the Torah and the prophets (whom they see as a nuisance), they spend a lot of their time and energy studying the Talmud, which is a commentary on the Torah. They also seek to find rabbis more lenient and to their liking as they seek to live out all the laws, rules and regulations of the Talmud so they can be good Jews.

Instead of focusing on the deeper meaning of the Law, then, which was what Jesus tried to teach them, they end up living out a religion that has as its focus duties, rules and regulations that would help them end up feeling like good Jews because they have kept the laws. It is this mistaken focus that Jesus ended up critiquing them for so often, and it was because of their resistance to change that they ended up crucifying him.

Participants in the Tantur Ecumenical Institute attended an orthodox Jewish Sabbath celebration as part of their course, after which we were assigned to different families for a Sabbath meal. Another priest and I had to climb three levels of stairs (with my bad knee), as it would have been considered work to push an elevator button. We were not allowed to take a picture of the family, as that also would have been seen as work within their home. And we were not allowed to call a taxi, so the kids in the family went with us into the night to show us where we could catch a cab.

What was striking was the emphasis on trying to be good orthodox Jews through these external rules and regulations, which seemed so superficial to the participants in the Tantur program. However, we had to admit that this style of life did give the family members two things so often lacking in our modern society: identity and security.

St. Luke, in the second reading from the Acts of the Apostles, addresses this need for identity and security. Peter realizes God has no favorites; that all who love God and do God’s will are acceptable to God. He goes on to say that Jesus brought the Good News to Israel but is Lord of all peoples, the same Jesus who went about doing good and healing all under the power of Satan, fulfilling all the prophecies about him. We can now put our faith and trust in Him, that he will justify us by his grace, and also help us live out his teachings on the primacy of charity by the power of his Spirit.

The Eucharist is a living out of the Emmaus account, and also the Last Supper, both events that were significant in the life of the early Church, and meant to be central to our lives today as followers of Jesus.

May our celebration help us to live out our faith not simply as a keeping of rules and regulations, but as a religion of the heart that balances faith and charity in our everyday lives.