Can you remember and identify a time when you felt called by God?

As part of a missionary Church, all of us are called to a vocation, a special role given to us by God that if we don’t do, will not get done. As Pope Francis reminds us often, we are all called to be “missionary disciples.”

In today’s gospel, Jesus calls Peter and his brother Andrew; James and his brother John, to follow him. Richard Rohr points out at times that the call was not so much to “worship” Jesus, as to “follow him,” to think, speak and act as Jesus did, which fits the definition of a disciple as a mathētēs or life-long learner.  That same call to follow Jesus has been extended to us by our baptism and by our belief in Jesus.

Speaking of belief, it is noteworthy that in his letter to the Romans, Paul points out the difference between belief and action. Believing in our hearts makes us righteous, but it is confessing with our lips that truly saves us. This tension between faith and works has led to extreme views throughout salvation history. At one point, the theory of apokatastasis, the redemption of all, led to either massa damnata on the one hand, or the redemption of all on the other.

Augustine would say: “the one who created you without you does not justify you without you.” In the end, we hope for the salvation of all, but we cannot know if all will be saved.

Walter Kasper, in his book Mercy, claims both divine freedom and human freedom are a mystery. The only answer open to us, on the basis of biblical testimony, is unconditional trust in the immeasurable mercy of God, who knows ways inscrutable to us, and who never ceases to court human beings and to make their positive response attractive. In his mercy, God holds the possibility of salvation open for every human being who is fundamentally willing to be converted and who is sorry for his or her guilt, even if their guilt is ever so great and their former life ever so botched up.

The fact the two of the disciples called were casting their nets, and two were in the boat mending their nets, is significant. This could indicate the constant need for the church to not only be evangelizing, casting its nets, fishing for people, but also the need for the church to be constantly renewing and reforming itself, mending its nets. That is what Vat II certainly set out to do.

Jesus comes into the world as the Second Person of the Blessed Trinity, a representative from the community that is God—and thus his basic purpose is to draw the world into community around him. “He said to them, ‘Come after me, and I will make you fishers of people.’” There is so much packed into that simple line. Notice the way that God acts. He is direct, in your face; he does the choosing. Jesus is not offering a doctrine, a theology, or a set of beliefs. He is offering himself: become my disciple, apprentice to me. “And I will make you fishers of people.” This is one of the best one-liners in Scripture. God is the Creator, the one who makes us from nothing. And what he makes us is always a reflection of himself: a fisher of people.

It is this radical call that makes the final profession of any young religious man or woman, or the ordination of any young priest, the emotional and meaningful occasion that they all are. 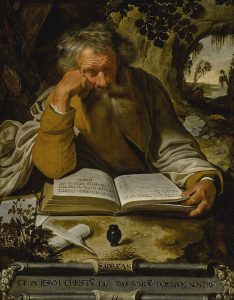 Today we honor St. Andrew. There are differing accounts of his call. In Matthew 4:18-22 and Mark 1:16-20, he is called together with Peter. In John 1:35-42, he begins to follow Jesus based on John the Baptist’s testimony, “Behold the Lamb of God. He recognizes Jesus as the Messiah and immediately brings Peter to Jesus. Thus, Andrew is known as the first disciple of Jesus.The Byzantine Rite calls Andrew Protokletos or “first called. Later, when Jesus chose his apostles, Andrew was among the Twelve and also at the Last Supper.

Andrew was also present at other key moments, pointing out the boy with the loaves and fish. Philip spoke to Andrew first about the Greeks wanting to meet Jesus, and he was one of the four who asked Jesus about the end of time. It is uncertain where Andrew preached or where he died, but ancient tradition associates him with Greece. Another tradition links him with Scotland, where his memory is said to have inspired the first bishop. Tradition holds he was crucified on an X-shaped cross at the city of Patras in Achaea. The cross of Saint Andrew, which represents Scotland on the Union Jack, was first associated with Andrew in the 10th century. He is patron saint of Scotland, the Ukraine, Romania and Russia, of the Greek Church and of the fishing industry.

The Eucharist is a sharing in the radical decision Jesus made to follow his Father’s will to reveal the depth of God’s love for us that led him to the Cross. May our celebration empower us to be like Peter and Andrew, James and John, and let go of anything in our lives that prevents us from following Jesus more closely, whatever our vocation in life is.