Have you ever met a king or a queen?

Believe, repent, and let Jesus be your Lord and King, the center of your life. 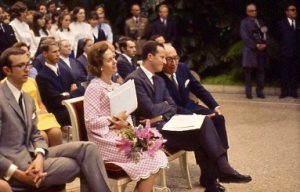 When Cast C of the International Singing Group Up With People was touring Belgium in 1968, we performed for the former King Beaudoin and Queen Fabiola in their jungle garden. We had a chance to chat with them and to glimpse a little of their power, riches and responsibility as monarchs. They were small in stature, very human and very Catholic as well. Though not monarchists as a group, we cast members found themselves greatly admiring the royal couple.

This experience connects with the feast we celebrate today – Christ the King, and the type of king Jesus was. The first reading reminds us that Jesus is royalty, that he belonged to the line of David who was himself king of Israel. In the second reading, St. Paul exudes enthusiasm over his experience of Jesus, whom he calls the very image of the invisible God, the Creator of all things, the head of his Body, the Church.

St. Paul goes on to add what God the Father has accomplished for us through Jesus Christ, his work of greatness, redeeming us from the darkness of sin through forgiveness and sanctifying us, transferring us into his kingdom of Light. Now that is a powerful description of Christ our King, far transcending any human figure or power.

But ironically enough, it is on the cross that is revealed to us the deepest nature of Jesus as king. To those who opposed him, who hated him, who collaborated to end his life – he was a blasphemer, a rebel, an upstart who claimed that he was God, and so they had him killed as a common criminal.

Unwittingly, however, and as part of God’s mysterious plan for the salvation of our fallen humanity, they were revealing to all the very identity of the Jesus that they were denying. “If you are the Messiah, the Son of God, King of the Jews – save yourself!” they taunted him. To the leaders, the disgraceful death Jesus was experiencing proved beyond a shadow of a doubt that he could not possibly be the Messiah. Yet to those who have faith, his willingness to accept that excruciating death that would lead to his resurrection, proved once and for all the depths of God’s love for us.

This Jesus, who was born in a manger, who lived an itinerant life, who was stripped, tied and nailed to a cross, who on the cross let go of all power and control – this Jesus whom the people watched curiously, whom the leaders scoffed, the soldiers mocked, and the thief derided – this Jesus responded with compassion, mercy and forgiveness to the thief who turned to him in need with faith.

This is a new kind of power, a new kind of king, who in the throes of death revealed unfathomable love and wrought our redemption, our salvation, our reconciliation with God. And now we are invited to believe in him as our King, to surrender to him in faith, and thereby to enter into his kingdom that is not of this world, yet already begins in this world, in the hearts and lives of those who believe. 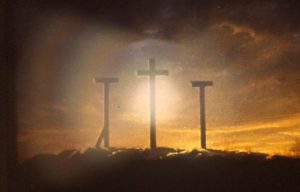 We access that unconditional love of Jesus through repentance and confession, as did the good thief. It is no coincidence the gospel of Luke ends as the gospel of Mark began, on a note of believing and repentance. The first word that Jesus speaks in the gospel of Mark is “repent and believe in the Good News.” Here, on the cross, the good thief rebukes the other, believes in Jesus, turns to him, repents, confesses his sin and asks for forgiveness. Truly faith and repentance are the key to the reign of God. What beautiful words the thief heard: “Truly, I tell you, today you will be with me in Paradise.” All we need to do to hear those same words is believe and repent as he did.

Bob, a participant in a Twelve Step retreat, was tempted to stop with Step 5, which is basically a general confession of one’s whole life. He was trying to avoid Step 6 that would call him beyond the experience of being forgiven, to now moving on to become like Jesus and learn how to forgive his abusers. He actually felt like throwing up when he realized what it meant to truly live Steps 6-9 of the program, forgiving others as he had been forgiven, and making amends to all the people he had hurt in the past. He was being attracted, called, invited to become just like Jesus our King.

The secret is that when we act like God, we get to feel like God. Jesus on the cross was suffering, yes, but he was also at peace, because he knew he was doing the Father’s will. A coroner, who had done autopsies on hundreds of violent deaths, was viewing the shroud of Turin in Los Angeles. He remarked to the custodian that the violence of their deaths was written on each of their faces, but the face of this man on the shroud who had obviously died a violent death, was totally at peace. That peace, which we also experience when we do the will of the Father, is already an experience of the reign of God within us: “Today, you will be with me in paradise.”

John O’Shea, in his commentary on this gospel, uses it to remind us of the importance of confronting our own death: “Spiritual traditions recommend that we move our death from something in the future to right now. In this position of nearness, death can test our lives and teach us what to do. And it has many lessons to contribute to our education. It weans us away from the illusion of immortality. It encourages us to prioritize our activities and focus on what is most important. It instills a sense of freedom, reaffirming our ability to lead a life of integrity. It awakens us to the dangers of procrastination, telling us to get out of our chair and deal with unfinished business. There are relationships that need reconciling, and people who need to be thanked. Finally, it opens us to each moment, cherishing whatever arises in all its fragility. No one knows how he or she will die. So, meditating on our death is not preparation for a future event. Rather it tells us how to live so that whenever and however we die, our life will be fulfilled.”

The Eucharist we celebrate today centers on humble gifts of bread and wine transformed by faith and prayer into the Body and Blood of Jesus. These gifts in turn transform us into the Body of Christ, empowered to go out and love others as he has loved us. So, believe, repent, and let Jesus be your Lord and King, the center of your life.