Following Jesus Through Persecution and Suffering

Liturgists involved in choosing the readings for the Eucharist try to establish a connection between especially the first reading and the gospel. It takes a little digging, but there are many mini-themes connecting today’s readings.

They all point to how Jesus completes the Old Testament and shows us how to handle persecution and suffering in our lives – with gentle non-violence and loving forgiveness.

In the first reading, the Israelites, after centuries of oppression and persecution in Egypt, were finally allowed to leave Egypt as the result of the plagues God inflicted upon the Egyptians. They left hastily, as pilgrims, heading out into the unknown, and as we know, were guided by a column of fire by night and a cloud by day.

There are very interesting details included in today’s account of that departure. First, they were accompanied by a group of non-Israelites (“A mixed crowd also went up with them”) suggesting to me there were other ethnic groups and nationalities in Egypt who were also being persecuted and took this opportunity to join themselves to the Israelites to escape their oppression. 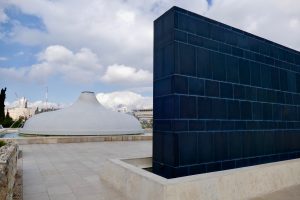 So, unlike the Essenes of Qumran, who went into the desert to be exclusive, set apart, considering themselves better and purer than the others as was reflected in their fixation on water purification rituals, these Israelites were more open to others who were marginalized, excluded and down-trodden. The exclusivity of the Essenes is symbolized at a museum in Jerusalem, with jets of water constantly spraying a white dome set apart from a black wall representing the rest of humanity.

A second significant detail is that God was keeping vigil over the Israelites, throughout all their suffering (“That was for the Lord a night of vigil”). This mirrors Psalm 136 which reminds us God’s love is everlasting, that God remembers us in our low estate, and rescues us from our foes. So, whenever our trials and troubles threaten to get the best of us, we can always remind ourselves God is right here with us, keeping vigil over us and will eventually turn everything to the good for those who love God.

Turning to the gospel, we see Jesus being persecuted by the Pharisees, who in many ways are similar to the Essenes. Their focus was also on ritual purity and keeping perfectly the many laws they had developed, in an attempt to make themselves holy, believing then the glory or shekinahof God would return to the temple. And since Jesus did not meet their high standards, with his openness to the poor, eating with sinners, not worrying about keeping all the minute laws as he put the law of love always first – they had to condemn him and even try to destroy him.

What was Jesus’ response? He set out on a journey into the wilderness (“He departed”), and was followed by a very mixed crowd himself, who were coming to him for forgiveness and healing. To go to the temple involved much fuss and bother, and cost a lot of money to purchase the right sacrifices with many other expenses as well. And here was Jesus, present, among them, freely giving them the love, caring and compassion as well as healing they desperately needed, without judgment or pre-conditions. Is there a lesson here we need to still learn as a church?

There was no cloud or column of fire needed, for Jesus was the beloved servant of God, filled with the Holy Spirit, the very presence of God where God is most easily found – among the poor, down-trodden, marginalized, oppressed and excluded. Jesus, oppressed by the Pharisees as the Israelites were in Egypt, responds by total non-violence, teaching and healing, quietly and gently proclaiming a unique justice to all peoples, including the very Gentiles who were rejected by the Jews.

All this was setting the stage for the way Jesus would redeem humanity – by the selfless sacrifice of his life, his passion, and his death that would lead to his resurrection – overcoming the power of sin and death itself. It is that new life he offers to all who will believe in him and join him in his new creation. 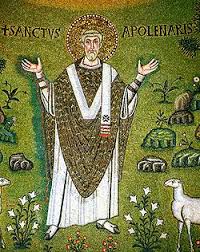 Today, the Church honors St. Apollinaris, who is a suitable saint for the readings today.Although not well known, his life was remarkable. A commentary in the Living With Christstates he lived in the first century and according to tradition, was chosen the first bishop of Ravenna by St Peter. He was also one of the first great martyrs. During the reigns of emperors Claudius and Vespasian, he was repeatedly exiled and tortured but continued to evangelize and work miracles until his martyrdom.

The Eucharist is our new manna, God nourishing and sustaining God’s people today in an even more wonderful way than in the desert – through Word and the very Body and Blood of Jesus, forgiving and healing us even as we celebrate.

May our celebration empower us to follow Jesus through any possible persecution and suffering as he did, without bitterness or resentment, just pouring out the inclusive, life-giving love of God as part of the new creation and kingdom he came to inaugurate among us.