Repent and Believe in the Good News –

A dishonest painter cheated by thinning paint with water to paint a church. As long as it didn’t rain right away, he thought, he would be okay. That night there was a big rainstorm. He ran to the Church in the morning and saw that the paint was running down the walls and as he got closer, he realized it was forming letters. As he got even closer he could make out the words and read, “Repaint, you thinner, and thin no more!”

The message in today’s gospel is clear: repent. In a word, we are invited to repent to make way for the Kingdom of God that is near, as Jesus mentioned in the first words he spoke in the gospels.

Jesus laments the resistance of the people of his day to repentance, to change, to his message of Good News. Our guide on our pilgrimage to the Holy Land, standing by the Church of the Beatitudes and overlooking the Sea of Galilee, told us the villages that Jesus was speaking about were nearby – Chorazin, Bethsaida and Capernaum, and quoted this passage of woe to these communities for their rigidity and hardhearted resistance.

The following quote from an anonymous source captures the nature of that resistance: “High are the walls that guard the old, the tried and secure ways of yesterday, that protect us from the dreaded plague – the feared heresy of change. For all change is a danger to the trusted order, to the threadbare habits of yesterday.”

It is unfortunate the English word “repent” does not really express what Jesus was teaching. When we say repent, we usually think of a wrongdoing or moral action we need to confess and try to change. However, the Greek word for repent – metanoia – has a much more profound meaning. “Meta” in Greek means “highest” – like meta-physics. “Noia” comes from the Greek word “nous” which pertains to “mind.” So, the English word “repent” really means to put on our highest mind, our best way of thinking, being and acting, even perhaps changing our belief system and our worldview.

Paranoia is the opposite of metanoia. It implies being of two competing minds. The basic attitude of metanoia is one of total and complete trust in God to move out into the unknown, like Abraham. The symbol of metanoia is an open hand and outstretched arms, like Jesus on the cross. The basic attitude of paranoia is just the opposite – fear and distrust. The symbol of paranoia is a closed, clenched fist and tightly crossed arms. So, Jesus’ request for us to “repent” means to be open, willing, trusting and obedient to his Word, to let go of fear and to place our complete confidence in him.

I experienced metanioa, putting on a higher mind, as a young Oblate scholastic while conducting an Our Familycampaign in Edmonton. Just before mass and my first homily of the campaign in Annunciation Parish, I was kneeling before the Blessed Sacrament, as I thought I should as a devout young seminarian. The pastor, Fr. John Hunt OMI, however, was at the back of the church, enthusiastically welcoming and loudly greeting parishioners as they arrived. I began to feel some annoyance and anger towards him that started to morph into resentment. Why was he so loud? Did he not see that I was trying to pray?

I self-righteously carried that resentment into the mass. But as the Eucharistic celebration unfolded, something shifted within me. His outgoing nature and reaching out to people as they arrived had created a spirit of community and joyful celebration I could not help but notice, feel and eventually get caught up into. By the end of the celebration, I was thinking perhaps he was right and I was wrong – that I should have been doing what he was doing – connecting with Jesus in the people coming into the church, rather than trying to practice my own individual “me and Jesus” piety all by myself before the Blessed Sacrament.

As I reflected later on this experience, I realized Fr. John had evangelized me – my ecclesiology, theology and spirituality had shifted and my worldview had changed. I had experienced what Jesus is asking us to do in today’s gospel – repent, undergo metanioa, so the Kingdom of God can be more real within me.

Turning to the first reading, we have a bit of a problem. Usually liturgists choose readings that have some connection. That is hard to establish with today’s gospel. However, as this reading follows yesterday’s reading in opening up the whole Exodus scenario, a comment is warranted. The little newborn baby Moses is placed in a wicker in a basket, floating on the water of the Nile.

Very interestingly, it seems the Greek root for basket is the same as that for an ark. There is a subtle connection here with the ark of Noah that wrought salvation for his family and new life after the flood. To this child Moses floating in a tiny basket-ark will be given another ark of the covenant, to bring salvation and new life to the people after their liberation from slavery in Egypt. That will in turn set the stage for Mary, the new Eve and the ark of the new covenant in her Son Jesus the Christ, who is also the new Adam and the new Moses, leading a new people of God. 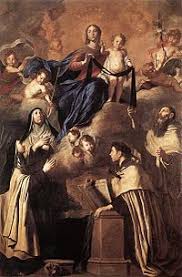 That reflection fits the optional memorial the church celebrates today – Our Lady of Mt. Carmel. The Carmelites have celebrated their patronal feast on this day since the 14thcentury. According to tradition, St. Simon Stock was given the brown scapular by the Blessed Virgin on this day in 1251. The Order of Carmel dates back to a group of Western hermits who in the 12thcentury settled on Mt. Carmel, overlooking the plain of Galilee, in imitation of the prophet Elijah. They grouped themselves around a small chapel dedicated to Our Lady. In the 13thcentury, the Order of Carmel as we know it was formed, retaining the twin devotions of the early hermits: to Elijah and his solitary prayer, and to Our Lady under the title of Mt. Carmel.

The Eucharist makes present the healing love and power of Jesus on the Cross, to those who repent and believe.

So, let us truly repent, experience metanoia, believe in the Good News and enter more fully into the Kingdom of God, right here and right now.