The Great Commandment and the Good Samaritan

A mother sent her little girl to the store with strict orders to come straight back. When she was late returning, a worried mother asked her why. The girl responded she had stopped to help her friend fix a broken doll. When the mother asked how she could fix a broken doll, she replied that she just stayed and helped her to cry.

Are you trying to get to heaven? Be a Good Samaritan – love all those who are in need, and heaven will be yours.

There is a gentle progression in the readings today. In the first reading, Moses, the great Lawgiver, encourages the people of God to keep the Law. In the second reading, Paul reminds us that Jesus is the new Law, that he is the visible form of the invisible God, and that in Jesus God has loved us and reconciled us to himself.

In the gospel, we see Jesus demonstrating the Law in action. The lawyer knows the Law, but is caught in the all too common human effort to lower the demands of the Law to suit the narrow biases of those who profess to be keeping the Law. It is remarkable that his response to Jesus is precisely the new commandment Jesus teaches elsewhere, equating love of neighbor with love of God. However, the lawyer’s question, “Who is my neighbor” is a tricky question meant to trip Jesus up or at least to justify his narrow concept of the Law. So, Jesus the master story teller, answers his question about who is our neighbor with the story of a Good Samaritan leading to the more important question: “Who in the story was a neighbor to the man in need?”

Let us explore the story more deeply. The road to Jericho dropped 3,600 feet in 20 miles and was notorious for bandits. The priest set traditional ceremonial requirements above charity; the Levite put safety first. A Samaritan was considered a heretic and a breaker of the ceremonial law. At their worst, the Jews had a narrow definition of neighbor which meant fellow Jews. That smug definition justified them not helping a gentile woman in childbirth since that was to bring another gentile into the world. They actually used the Law to excuse themselves from loving another human being! The contrast here is between the group in Israel most bound to the law of love, and the heretical stranger from whom love was not expected. 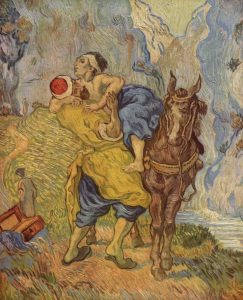 In terms of characters and story-telling, the expected sequence in the story would be a priest, a Levite, then of course an Israelite. By making a Samaritan the hero, however, Jesus challenged the long-standing enmity between Jews and Samaritans, who were regarded as an unclean people, the result of mixed marriages with Assyrian people from various regions following the fall of the northern kingdom. By depicting a Samaritan as the hero of the story, Jesus demolished all boundary expectations. Social position, race, religion or region – all pale in light of the call to love.

Jesus compares the selfishness of the ministers of God with the compassion of the hated Samaritan so that they could glimpse the unlimited nature of the duty of love. The one who possesses the secret of eternal life is the stranger who does not have the need for security (lawyer) or status and dignity (priest). His love was spontaneous and did not refer to a law.

Jesus’ parable shatters the stereotypes of social boundaries and class division and renders void any system of religious entitlement. Neighbours do not recognize any social class. Eternal life – the life of the age to come – is that quality of life characterized by showing mercy for those in need, regardless of their race, religion or region, and with no thought of reward. Mercy sees only need and responds with compassion.

To love God with all one’s heart and one’s neighbour as one’s self are the core of the kingdom – a society without distinctions and boundaries between its members. These rules are so radically different from those of the society in which we live that living them at times calls us to disregard all else, break the rules, and follow Jesus’ example.

There is strong symbolism in this story: We are the wounded strangers; Jesus is the Good Samaritan. The Spirit is the oil; the blood of Jesus is the wine. The Church is the inn, and it is really Jesus who will come again. Jesus is hidden in the stranger, and found in the hated Samaritan. In the end, we are the receivers of the injunction: Go and do likewise.

An example of a modern-day Good Samaritan would have to be St. Mother Theresa of Calcutta, whose ministry involved picking up the dying, regardless of their religion or race, untouchable or not, to give them a death with dignity. Her famous saying to us was, “What you would want to do for Jesus, whom you cannot see, do for the person in need next to you, whom you can see, and you will be doing it to Jesus.”

The Eucharist makes God’s love in Jesus present to us, to transform us into his Body, his people, building His Kingdom here on earth through love for all in need.

So, in the end we don’t have to worry about getting to heaven, or possessing eternal life. We just have to be about caring for all those in need right around us, and heaven will be ours.