Light in the Darkness

St. John, whose feast we celebrated yesterday, begins the readings today with the proclamation that God is light and in him there is no darkness. Those who repent and receive the forgiveness of Jesus will have communion with each other, and also walk in the light.

The Gospel, however, is in stark contrast. There we see the darkness of Herod at its worst. Insecure and power-hungry, he reacts to the news that the wise men tricked him by murdering all the children in Bethlehem under the age of two, hoping in that way he might kill the new-born king of the Jews. That is terrible darkness indeed.

Actually, in Herod we see the darkness of paranoia. Ron Rolheiser OMI distinguishes between metanoia, to which we are called, and paranoia, the result when one lacks faith and resists that call. Metanoia, the first thing that Jesus preached, comes from the Greek meta(higher) and nous(mind). It means not so much turning around, as putting on our highest mind, a new world view, a new way of thinking, feeling and acting. The symbol for metanoia is an open hand.

The opposite is paranoia, which is a closed mind, a fearful mind, a selfish outlook on life. The symbol for paranoia is a closed fist. That is the mindset of Herod, who thought only of himself and his selfish ambitions, and acted violently out of fear and paranoia at the cost of many innocent lives.

This also ties in with Gerald May’s teaching in his book Will and Spirit – we can be willing and open to God’s grace, or wilful and stubbornly resist God’s grace in our lives, which then leads to dysfunction and ultimately to addiction. Herod was completely selfish, stubborn and wilful, thinking only of his selfish ambition. He was addicted to power. Money, fame and power are the false gods facing us everyday and tempting us to live out of paranoia and darkness. 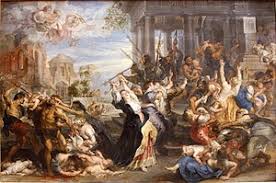 All of this painful reality points to one line in the first reading from 1 John that opens up the theme of not just forgiveness, but also that of healing: “If we confess our sins, he who is faithful and just will forgiveus our sins and cleanseus from all unrighteousness.”  Jesus came into the world with a two-fold mission – to redeem and to sanctify, to forgive and to heal. Not just to forgive, but also to heal and make whole.

There is a difference between “sin” (that which we do) and “sinfulness” (that which makes us do it). Our sinfulness will be painful emotions like anger and resentment, or defects of character such as false pride and stubborn self-righteousness, or even our addictions. For these we need healing, more so than forgiveness. Herod certainly needed forgiveness for his brutal actions, but at a deeper level, he was also in need of healing of his paranoia and insecurity. The Good News is that Jesus came both to forgive and to heal. Carey Landry had it right when he sang, “Grant us your forgiveness and healing.”

The Holy Innocents we celebrate today had done nothing at all to deserve such a fate. This act seems totally senseless. However, it can serve to remind us of all the people in the world, the voiceless and powerless, who innocently suffer from evil and greed. This feast teaches us that in God’s eyes, no one is unimportant, no one is unnecessary, no one doesn’t really matter. However meaningless their lives and deaths may seem to us, they shine glorious in heaven.

On a more personal note, the honour given to the Holy Innocents reminds us that if we suffer or even die for God’s sake, it has value even if we have little or no say in it ourselves. Honouring them honors also the loss of the people these children could have become, and their grandchildren as well. At the same time, we can remember the senseless slaughter of the innocent, often caught in the cross fire of opposing political forces, as well as especially the most innocent of all, the unborn who are killed by abortion.

A young couple in the north lost a pre-born child at about 7 months. In their grief, the brought the fetus back home, placed it in a nice coffin surrounded with flowers, and had a wake to which family, friends and neighbours came to pray and support them in their mourning. The next day a small, intimate yet very prayerful and meaningful funeral was held for the little child, who was then buried in the cemetery. Their faith, love and respect for this small, unborn child was marvellous to behold, and a stark contrast to the callous attitude to unborn children that is so prevalent in our pro-choice society.  They were living in the light, and were in turn a beacon of hope to all who knew them. 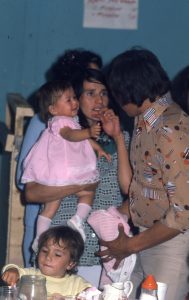 The Eucharist is a sharing in the light of Christ who forgives us, heals us, and invites us to metanoia and to live in the light.

Let us pray that we may renew own baptismal commitment to die to sin and live in the light of Christ, to receive forgiveness and also healing, to let go of any paranoia in our lives and to do metanoia.