Filled with the Spirit, Sent to Serve and Open to the Word

An elderly gentleman had serious hearing problems for a number of years.  He went to the doctor who fitted him with a set of hearing aids that allowed the gentleman to hear 100% clearly. The elderly gentleman went back for a checkup a month later and the doctor said, “Your hearing is perfect.  Your family must be really pleased that you can hear again.” To which the gentleman replied, “Oh, I haven’t told my family yet. I just sit around, listen to the conversations and I’ve changed my will three times already!”

The readings today share a powerful message that the gift of joy, which is so elusive in our world today, flows primarily from being filled with the Spirit, sent to serve, open to the Word and doing God’s will in our lives.

The first reading from Micah speaks of a ruler of mysterious origin, a new David, who shall arise, not from Jerusalem but from Bethlehem. This ruler will be the strength, security, peace and majesty of the Lord God. He will rule, not with military might, but with a different kind of power in doing the will of God. This ruler will be born of a woman complete with labor pains, and his kinfolk will be impacted by his birth. The reading does not mention joy specifically, but certainly prepares the way for it.

In the Gospel, Mary is that woman foreseen by Micah who reaches out to Jesus’ aunt, Elizabeth. It was Mary’s openness to God’s Will, her fiat that led to the conception of Jesus within her womb. Elizabeth, in her turn, is filled with the Spirit, utters a prophecy about Jesus, and also fulfils prophecy in that her own child would be filled with the Spirit. She lives in the hill country of Judea, has faith like Mary’s and recognizes her as the mother of Jesus her Lord. Theirs is a joyful and hope-filled encounter in which John the Baptist leaps for joy in Elizabeth’s womb. 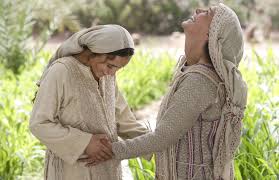 It is Mary who takes the initiative, however, and Jesus who quickens John. Jesus came to fulfil the old, so the promise draws its life from the spirit of the new, rather than the life of the old. In Mary, the New Testament reaches out to the Old, transforms it, and gives to it its ultimate significance. Luke contrasts Mary’s faith with Zechariah’s failure to believe, and her greeting with his inability to articulate the Lord’s Word. Thus, in Mary and Elizabeth, and in the Church, faith and openness to doing God’s will is the ground for expressing God’s word and experiencing the joy of the Holy Spirit.

We are given here a picture of two humble obscure women whose faith transformed the history of the world. Both form a portrait of the Christian life: filled with the Spirit, sent to serve and open to the Word. The same Spirit conceives Jesus within us if we have her faith and openness to doing God’s will. 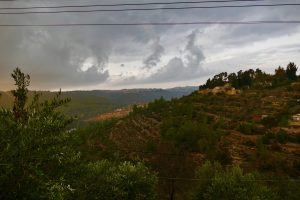 Unlike the Old Testament women such as Jael and Judith, in whom God used physical might and strengthas well as faith, now God will work through Mary’s humble faith and lowliness, as God will through ours.

Joy is a recurring theme in Luke. The joy of the annunciation and the births in the first two chapters recurs in the joy of mercy expressed through forgiveness, healings, raising the dead, and receiving the outcasts throughout the ministry of Jesus, whose sole focus was to do the will of the Father. Appropriately, at the end of the gospels, the disciples return to Jerusalem with joy and are in the Temple praising God. God’s redemptive work brings joy to the human experience of doing God’s will, and that joy is most fully expressed in praise of God as we are doing now.

The second reading from Hebrews simply adds to the theme of doing God’s will as the source of new life and joy. The life and death of Jesus who accomplished the will of the Father by revealing to us the depths of God’s mercy and love, is the sacrifice that is superior to all Old Testament sacrifices. The greatest sacrifice then is to do the will of God, which Jesus does perfectly and in so doing gives us his holiness.

My brother Louis died in January of 2009 after a valiant 4-year battle against cancer. He was a quiet self-effacing farmer whose many virtues continue to shine forth now to those who knew him now as much as when he was alive. He was honest to a fault, sometimes costing him financially. He had a keen sense of justice and fairness in his business dealings. His gentleness made him a beatitude person. He loved his wife and family passionately, and cared deeply for the less fortunate.  He found joy in farming and showed a deep sense of gratitude, even in the midst of his struggle with his illness. Over and over he would be heard murmuring “Thank you Jesus, thank you Jesus.” Though he struggled at times with his limitations, weaknesses and temptations, he was humble enough to call me, his younger brother, a priest then bishop, for support, counsel and direction in times of need. In the light of these readings, he remains a stirring example of doing the will of the Father in his own quiet, joyful way. 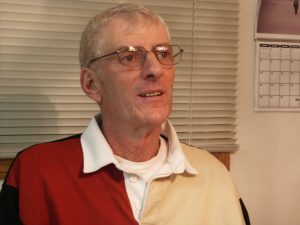 The Eucharist is an experience of humble joyful faith in the presence of the love of the Risen Lord through Word and Sacrament.

May our celebration make us more like Mary, Elizabeth and Louis, strengthen our faith and empower us to find joy as they did in doing God’s Will, quietly bringing new life and love to a battered world.