There are two options for the first reading on the Feast of Our Lady of Guadalupe. The richness and appropriateness of the second option from Revelations makes for an easy decision. The whole reading lends itself to a deeper understanding of the mystery of our salvation through Jesus and Mary, and invites us to come back to God the Father through Jesus Christ with Mary our Mother in the Holy Spirit. 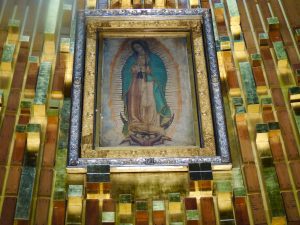 The Tilma on the wall of the shrine

In his vision, John first sees God’s temple in heaven opened. This connects directly with the veil in the temple that was torn from top to bottom when Jesus died on the cross. That curtain was to keep people out of the Holy of Holies. Now there is no separation between God and humanity. For the first time ever, we can now see into the heart of God, and what we find there is humility, mercy, compassion, forgiveness, unconditional love and total non-violence.

Next, John mentions that the ark of the covenant was seen within the temple. That ark symbolizes the intimate covenant relationship that God always wanted with God’s people, starting with a couple, Adam and Eve. Then with Noah and his family. After that came a covenant with Abraham and his whole tribe. With Moses, it was a covenant with a nation, a people set apart.

Because the people were never faithful to these covenant relationships, God made a covenant of unconditional love with David – that God would be with him no matter what he did. And David lusted, committed adultery, and arranged a murder. However, when confronted by the prophet, he repented, experienced God’s unconditional love as forgiveness, and that transformed David into the only true king that Israel ever had. He even became a forerunner of the Messiah, Jesus, which is why Jesus was always referred to as Son of David, and never Son of Moses, or Elijah.

Then John describes a woman clothed with the sun, with the moon under her feet and a crown of stars on her head. This is almost a description of the tilma of St. Juan Diego bearing the image of Our Lady of Guadalupe that she herself painted. The Aztec people were well trained in reading pictographs whose color, position, shape and symbols all conveyed meaning. What they saw in the lady’s image bridged the culture barrier and helped them to make sense of the Gospel. They converted to Catholicism by the thousands, after decades of fruitless missionary work due to the harshness of the Spanish conquest.

The image shows the Lady surrounded by a sunburst. The sun was the greatest of the Aztec gods, symbolizing the source of life. Mary stands in front of the sun, respectfully showing that she and her son are more important, and in a sense a fulfillment of that symbol. The black moon represented the god of darkness, death and evil. Standing with her foot treading on the moon is a sign that these powers have been defeated. The people understood that though great, Mary was human. Yet, since she was greater than the sun or moon, these must not be gods, but only creatures that serve the true God.

Just as the stars had warned the Aztecs of the end of their empire, so now these stars signaled the beginning of a new age. The blue-green of the mantle was a color worn only by royalty. It was the color of the invisible Creator, the source of the gods. Wearing such a mantle means that she is of royal and heavenly origins, and that the child she carries will be a royal and divine ruler. 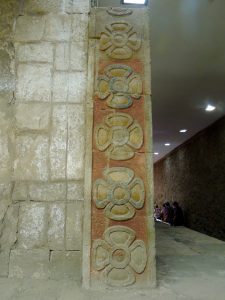 Flowers at the pyramid site also on the tilma

The four-petal flower over her womb is a symbol found in the ruins of the pyramids and symbolizes new life. The people would immediately understand the child the lady would birth into this world would be a source of new life for the people. The colors of this flower and their art match the color of her robe – all convincing them of the truth it portrayed.

Mary, of course, is also the ark of the New Covenant, for she carried within her not the Torah, but Jesus, the Word made flesh. Our pilgrimage group was delighted when visiting the Oblate community in Mexico City to discover their parish church had below it a Blessed Sacrament Chapel featuring Mary as the Ark of the new Covenant. 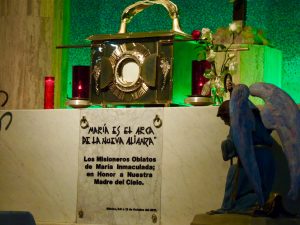 Next, John hears a loud voice in the heavens proclaiming that this child would be the salvation, power and authority of the Messiah bringing about the kingdom of God. The Messiah would have four roles: gather the nations to himself, restore the glory of the temple, overcome the enemies of Israel, and reign over all of the world.

And fulfill those roles is just what Jesus did: People from all nations were coming to him, not to the temple, which of course aroused the jealousy of the religious leaders. As well, people from all nations were gathered at the Pentecost event. Jesus also spoke of himself as the temple where God dwelt, and his spirit did return to the temple, not a physical building but upon the church gathered together at Pentecost in the form of wind and fire. Through his resurrection, Jesus destroyed the real enemies of Israel, sin, suffering, evil and death. And of course, Jesus is now reigning over all of creation as Kyrios, as the crucified-risen Lord.

The Gospel account of the Visitation of Mary to her cousin Elizabeth adds the elements of faith, love, joy and humility to this feast of Our Lady of Guadalupe. Mary believed the Word of the angel, she cared for Elizabeth her cousin in her advanced age pregnancy, John the Baptist leapt for joy in the presence of Jesus, and there could not be a humbler scene than these ordinary country women whose destiny would never-the-less change the course of history.

The Eucharist also brings together those elements of faith present at the visitation: we believe these humble gifts of bread and wine will be transformed into the body and blood of Jesus; we celebrate with joy, and are sent out to communicate God’s love to the world.

So, let us strive to live out our Catholic faith by returning to God our Father, through Jesus Christ our Lord and Savior, with Mary our Mother, in the Holy Spirit.